Fundraiser of the year! 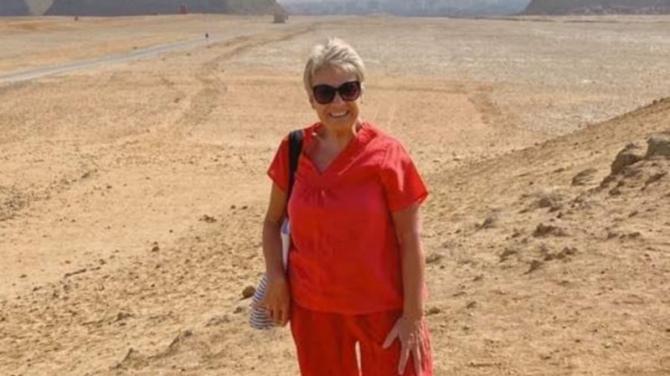 KILKEEL woman, Maura Ward has been named The Cure Parkinson’s Trust (CPT) Fundraiser of the Year.

The Mourne woman was diagnosed with Parkinson’s in 2013 when she was 64, but nothing has stood in her way of living her best life.

She has previously completed a skydive to raise awareness of the condition and to celebrate her 70th birthday last year she decided - with some convincing from her son Johnny - to mark the occasion by climbing Mount Fuji.

Even before her training was curtailed by illness in the months leading up to the challenge, Maura knew this would not be an easy feat.

However, Johnny was with Maura every step of the way and when they reached the summit they purchased postcards to send home, on which Maura managed to scribble ‘Made it!’

The Fundraiser of the Year Award recognises an individual who has ‘gone above and beyond’ to raise funds and/or awareness for Parkinson’s.

Maura has tirelessly raised awareness of Parkinson’s and is determined to not let anything stand in her way, having already visited over 60 countries and her bucket list continues to grow.

She told The Outlook she was “humbled” and “surprised” with the award and will continue to raise awareness of the condition.

“I couldn’t believe I had won it because all of the finalists had amazing stories to tell and had done so much great work.

“If I have done anything over the years to make people think twice about Parkinson’s then it has certainly been worth it.

“Raising money is certainly important, however raising awareness is equally so and I wanted to very much do this, and will continue to do so,” she said.

Maura and her son, Johnny pictured on their way home from their previous travels

Maura said unfortunately people are getting younger who are diagnosed with Parkinson’s and she believes there is going to be a lot of time and money spent on resources if a cure is not found eventually.

With having underlying health conditions, Maura is also in complete lockdown due to the Covid-19 crisis, something she is finding very alien.

“At the minute I am not coping too badly and we are managing to have an online family quiz once a week and I get to see my grandchildren on Skype, which is not so bad.

“I am looking forward to getting out and about again and Johnny and I have a big fundraiser planned for next year. However, we have not revealed any details about it yet.

“If we get a group to join us as good as we had for Fuji then it will be brilliant as we are all still in touch with one another too.”

Maura’s most recent travels have taken her to Thailand and Yemen where she visited Socotra Island.

She said: “I went to Thailand in January to get some warm weather which I finds help me with arthritis pains and I stayed in Chiang Mai for three months and also visited Brunei for a few days.

“I had already organised to meet Johnny in Yemen and we visited Socotra Island which was just paradise.

“Johnny is getting married in November and it is quite possible that the only people allowed into the country then will be Thais, so I might have an issue with that but I am trying to remain positive.”

Maura says she also has plans to return to her fundraising quest when lockdown finishes and life returns to some kind of normal again.

She added: “Parkinson’s is not a very sympathetic disease and I feel that because of the often lack of empathy there, it doesn’t automatically pull at your heartstrings.

“It is a gradual deterioration and an awful thing to see someone suffer who is at the later stages of condition.

“Raising close to £15,000 last year was just wonderful and a lot of that was down to John and Heather Knipe from Seaforde who helped to raise so much and were amazing in their efforts.”

Maura was expected to travel to London to receive her award, however due to the coronavirus crisis this was not possible and her certificate was posted to her home.

Meanwhile, Will Cook, CEO of CPT congratulated Maura on her recent award.

He said: “Maura is an inspiration. Not only has she completed this gruelling climb to the top of Mount Fuji, but she has harnessed an incredible network of supporters through her personal contacts, media interviews and her blog which translated into a huge sum raised for the search into a cure.

“Maura says that this was a team effort, and our thanks go to all those who walked and fundraised with Maura, especially her son Johnny. But we are delighted to recognise Maura for her excellent achievement at the heart of this challenge.”