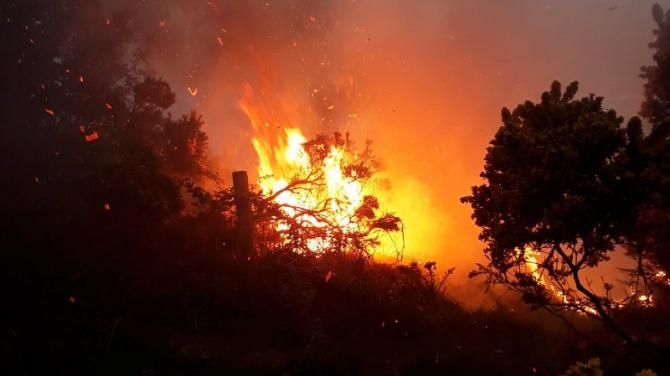 A LARGE wildfire at Castlewellan Forest Park continued to smoulder on Monday (18 May) after a three-day multi-agency effort to bring it under control.

Huge devastation has been caused to a protected forestry area and local wildlife species after the blaze was deliberately started on Friday, 15 May afternoon at the Leitrim Road area.

Fire crews were tasked to the blaze shortly after 1.30pm after reports that a large area of gorse and forestry had been set alight.

A significant number of NIFRS resources including seven pumping appliances, a command unit and supervisory officers were at the scene of the fire over the weekend.

Over 50 firefighters, a high volume pump to extract water from the nearby lake, a specialist wildfire response team and specialist rescue team were all tasked to control the blaze.

A spokesperson from the NIFRS said: “The cause of the fire is believed to have been deliberate ignition and firefighters are continuing to monitor the area this morning (Monday).

“The public are reminded that deliberate setting of wildfires is a criminal offence and if you see anyone setting a fire you should call the PSNI immediately.”

Meanwhile, while firefighters continued to fight the blaze in Castlewellan, local crews were called to tackle another deliberate large wildfire in Kilkeel on Sunday, 17 May.

Firefighters used four beaters, two knap sacks sprayers and two hose reel jets to extinguish the fire, which was dealt with by 1.05pm.

Matthew Bushby, Countryside Services Manager for the Mourne Heritage Trust spoke to The Outlook about the devastating impact of the weekend fire in Castlewellan forest.

He said: “Controlling this latest major fire to hit the Mourne area again took a multi-agency effort with us, the PSNI and Forest Service assisting the Northern Ireland Fire and Rescue Service.

“This comes at a time when public services are under pressure and when those working are expected to practice social distancing, something that is particularly difficult in a wildfire situation.”

Mr Bushby walked the site on Monday to gauge an immediate impact of the damage in the area.

“As well as the loss of some forestry crop and its significant commercial value, very old Scots Pine woodland on the edge of the conifer forest has been badly damaged.

“Our walk through the area also evidenced the extent to which nesting birds have been devastated.

“Again, we appeal to the public to be mindful of the very high ongoing risk of fires in the countryside getting out of control and of the human, economic and wildlife costs when they do.”

Political representatives for the Slieve Croob area have all condemned the blaze and praised the emergency services for their efforts.

SDLP Slieve Croob Councillor Hugh Gallagher said: “This was a horrendous blaze and is set to have a major impact on the wildlife and trees.

“It is a sad day because there has been so much positive research done on the animals and a good bit of that has gone and we will not know the extent of the damage for the next couple of months.

“I have had calls from people all over Ireland who have heard about the damage because it is such a popular destination for people to travel to and they are saddened by what has happened.”

Councillor Gallagher said he will be following up with the PSNI and their investigation into the blaze.

UUP Slieve Croob Councillor Alan Lewis said he was “shocked” to learn of the deliberate blaze on Friday and hit out at those responsible.

Councillor Lewis added: “I commend the NIFRS for their commitment and expertise. The message must be under no circumstances should fires be lit near forest parks or areas of natural beauty.

“Even the most controlled fire can spiral out of control within minutes causing widespread damage, endangering wildlife and local residents.”

Sinn Fein Slieve Croob Councillor Roisin Howell also reached out to thank the emergency services for their efforts in controlling the blaze.

Councillor Howell said: “Huge gratitude to the men and women of NIFRS who risk their lives to save others. Thanks also to the

Mourne Heritage Trust and local forestry staff who all worked together over this past few days battling the fire.

“Big thanks also must go to Felix Coffee Dock and Veronica Blaney who prepared batches of breakfasts to take out to the fire crews.

“We are so blessed in the town having folk such as these who are the true meaning of community spirit.”