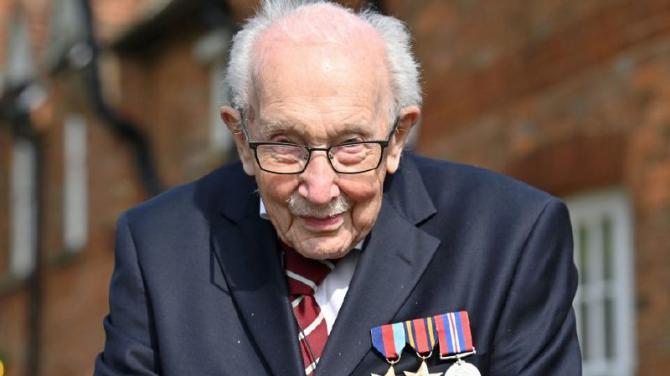 Captain Tom gripped the country’s attention throughout the lockdown with his fundraising achievement raising over £32m for charities in the run-up to his 100th birthday.

He was recently also knighted for his fundraising efforts after completing 100 laps of his garden before his milestone birthday in April.

Last week the Southern Trust revealed it had received a share of £109,000 from Captain Tom’s fundraiser.

DUP Upper Bann MLA, Jonathan Buckley welcomed the allocation of funds that have been received by the local Trust.

Mr Buckley said: “Colonel Tom Moore’s story provided hope and inspiration at a time of darkness, and this is an example of the significant impact his efforts will have at a local level.

“I will be personally writing to Colonel Tom on behalf of the constituents of Upper Bann to thank him for his efforts and for the impact this contribution will have on local healthcare. ''

The South Down MLA who also serves on the Health Committee at Stormont, said Captain Tom became an inspiration for many who were also fundraising.

She added: “During a very difficult and worrying time Captain Tom, unexpectedly, became the face of something very positive that was happening in communities across Ireland and the UK.

“Many people went beyond merely conforming to the restrictions, they found safe and creative ways to make a positive contribution.

“Across South Down schools, businesses and individuals have been making visors and masks, donations of PPE are being shared with those on the frontline and beautiful acts of encouragement through clapping and the displaying of colourful rainbows is plentiful.

“Unique fundraisers for the NHS, the Southern Area Hospice, Life and Time, and other critical charitable organisations continue to flourish during a financially challenging time.”

Ms Bradley continued: “I commend and thank Captain Tom for his heart-warming efforts that raised such a staggering sum and I thank all the people across South Down who mirrored that same generosity of spirit throughout Covid-19.