Brontes 'blown away' by support for 10k challenge 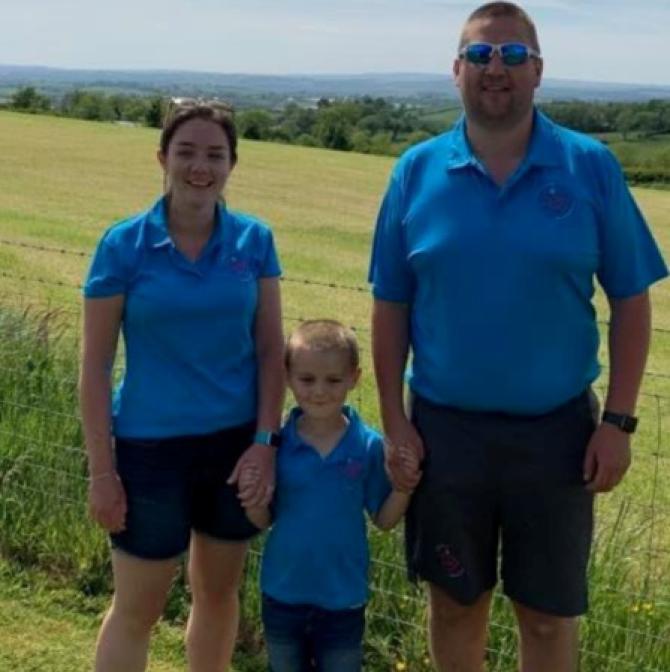 Gareth and Kirsty Bronte with their son, Caleb

THE Bronte family from Glascar said they have been “blown away” by the support that was shown for their 31-day challenge in memory of their daughter, Hannah Stella.

Local couple Gareth and Kirsty Bronte’s aim of the ‘10k a Day in May’ is to raise vital funds for the Neonatal Intensive Care Unit at the Royal Jubilee Maternity Hospital where Hannah spent eight days.

And this year, the Bronte family have raised an additional £4,000 for the unit - with more funds still to come in.

And the idea for the fundraising challenge came after the local parents said saying goodbye to their precious daughter was heartbreaking and they wanted to do something to help other parents who found themselves in that time of sorrow.

Gareth, a Dromore High School teacher and Kirsty, a GP who are also parents to Caleb (5) said the fundraising challenge was only ever envisaged as a one-off.

However, they had so much fun with friends and family last year, they decided in January to do the challenge again last month.

Gareth told The Outlook himself and Kirsty have been overwhelmed by the support once again shown for their challenge.

He said: “It was certainly not how we imagined it would go, but we have been blown away by the support we have received from our family and friends.

“So many people have been out walking, running and cycling over the 31 days, and we are so grateful to everyone for helping us remember our wee Hannah.

“We always said our main goal was just getting people out and active this year especially during lockdown, but so many people have been incredibly generous.”

Gareth said there were around 60 people each day in May who took part in the challenge in memory of Hannah.

“We never envisaged so many people this year would get involved again and it was just amazing.

“With lockdown easing Kirsty and I were also able to get out with our neighbours for a walk which was lovely for the company.

“Before, one of us always would have had to stay with Caleb - so it was nice that we could have another individual with us over the last few days.

“The great weather also helped and there was very few days in May that we had to walk in wind and rain which was also wonderful,” he said.

The local couple are also now considering to hold their ‘10k a Day in May’ every year in memory of their little Hannah.

Gareth added: “Even though Hannah was only with us for eight days she has touched the lives and hearts of so many people, and we are comforted by the fact she is spending eternity with her Heavenly Father.

“We have had so many people enjoy the challenge this year, even with the circumstances and they have already been asking about it going ahead next year too.”