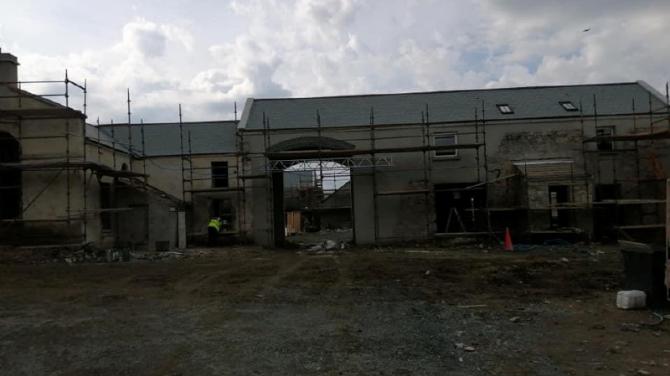 THOUSANDS of pounds worth of damage was caused to the roof of a listed building in Hilltown following the recent theft of lead.

Sometime between late last Thursday (25 June) night and the early hours of Friday (26 June) morning, a quantity of lead was stolen from McGreevy’s site at McCracken’s Lodge on the Castlewellan Road.

The lead was worth between £200 and £300 and there was considerable damage caused to the roof of the building when it was deliberately cut off.

Now large parts of the roof will have to be replaced which will set the time frame for completion of the building back, as well as creating further expense for the contractor.

The iconic building is one of the oldest in Hilltown and it had been lying derelict for a number of years after suffering fire damage until it was bought by the McGreevy family a few years back.

Crotlieve Sinn Fein Councillor Gerry O’Hare has described the theft as both “mindless” and “extremely disappointing” for the owners.

He said: “Planning permission was passed last year for the restoration of the building and this was to restore it to its original look.

“Everyone in the village has been admiring the building in recent weeks and how well it is looking and works have been ongoing from around March time.

“There has been a lot of anger from people due to what has happened and the building is a real asset to the town.”

The Hilltown councillor has been in touch with the McGreevy family who are keen to hear any information about the incident.

Councillor O’Hare added: “The amount of lead that was stolen was not very much and is estimated to be around £200 to £300 however, where it was cut from has caused extensive damage to the roof which will now have to be taken off for repairs.

“There has been a lot of hard work and time that has gone into this and the damage will cost thousands of pounds to repair.”

He continued: “This was just pure badness and the owners are disappointed by what has happened and are obviously very annoyed too.

“If anyone has any information in relation to this incident I would urge them to please contact myself or the McGreevy family.”