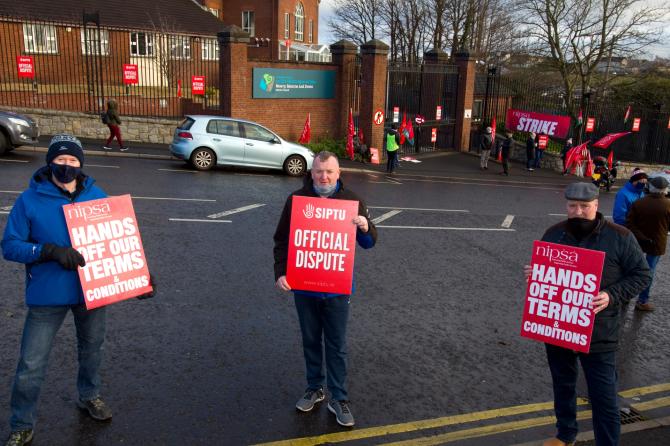 Council workers on the picket line outside Newry council offices during a day of industrial action in December.

INDUSTRIAL action by Newry, Mourne and Down refuse workers has been suspended, the Outlook can confirm.

The workers have been at the centre of an ongoing dispute over pay and conditions for some time.

A major issue is the matter of pay equality for workers in the former Down District Council area.

Meetings between unions and senior management at the council, arbitrated by the Labour Relations Agency, have been ongoing, with a meeting last Monday failing to reach an agreement.

However, following a further meeting today an agreement is understood to have been reached.

The news has been welcomed by Sinn Fein Group Leader on Newry, Mourne and Down Council, Willie Clarke.

He said: “Ongoing industrial action has been suspended so that proposals tabled can be finalised which will resolve the current issue.

“This is welcome and I thank trade union representatives and council management for their endeavours to work their way through the issues involved.

“We deeply appreciate their commitment to the health, safety and well being of all our communities.”

More in next week's Outlook.