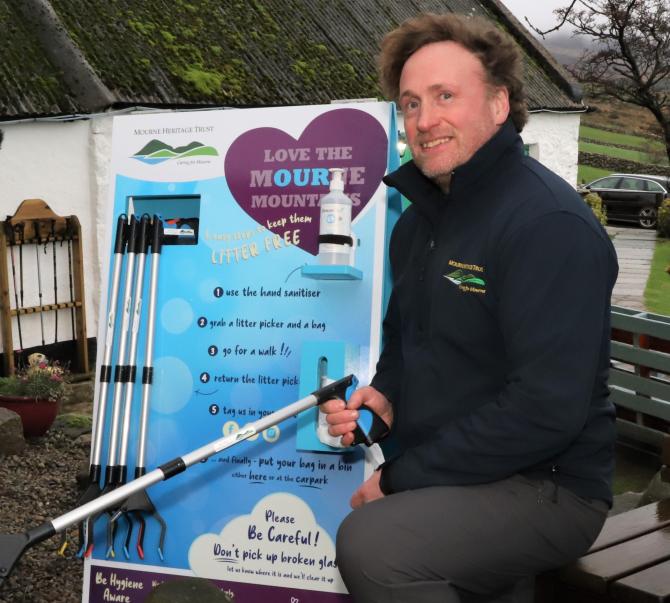 THE Chief Executive of the Mourne Heritage Trust has expressed concerns about a return of littering in beauty spots due to the most recent lockdown.

Last summer witnessed one of the worst for littering in the Mournes as more people flocked to scenic areas – but many did not pay heed to the well-known message of leaving no trace behind.

Chief Executive, Martin Carey warned there had been a stark increase in littering last summer due to lockdown and on average five members of staff visited on average 25 sites twice a week.

Mr Carey said in particular there appeared to have been an increase in ‘party camping’ which he says was no doubt linked to the restrictions around hospitality venues.

Annalong Valley was victim last week to a large mess left behind by people gathering in the area to camp – despite a stay at home message in place.

As well as leaving litter behind in the area, walls were dismantled and trees were also cut down – leaving Mourne Heritage Trust officials to clean up the mess.

Mr Carey said: “We do have some concern that party camping could become an issue again. That said, since hospitality venues closed on 16 December the incidents have been relatively few.

“So it seems that the cold weather is deterring most of those who would have been engaged in that during the summer. If things become a little milder we might see some further upturn but the hope would be that it’s nothing like what it was in summer conditions.

“Aside from the litter issue, wildfires can happen in winter if there is a spell of dry weather.”

Last year’s spate of wildfires in the Mournes attributed to an overall yearly rise in incidents for the Northern Ireland Fire and Rescue Service (NIFRS).

Figures released for last year revealed there was a 76 per cent increase in wildfires across Northern Ireland during March, April and May when compared to 2019.