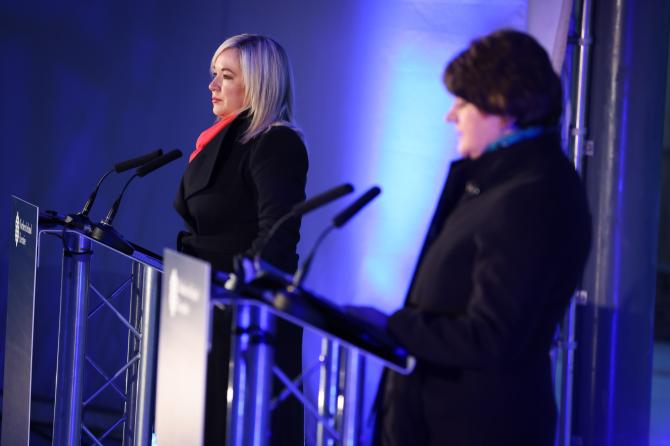 HOLOCAUST Memorial Day is a powerful reminder that we all have a part to play in tackling prejudice, ending division and creating a better future, First Minister Arlene Foster and deputy First Minister Michelle O’Neill have said.

The First Minister and deputy First Minister are among a number of political and religious leaders who featured in Wednesday's annual commemoration organised by the Holocaust Memorial Day Trust.

Due to the ongoing public health emergency, this year’s event saw participants contribute to an online commemoration to remember the many victims of the Holocaust and subsequent genocides.

First Minister Arlene Foster said: “It is important that we continue to remember those who lost their lives in the Holocaust and subsequent genocides. Society has to learn lessons from the past to create a better future for us all.

“The theme for Holocaust Memorial Day 2021 is ‘Be the Light in the Darkness.' That is particularly poignant at the present time. Not only is it associated with the Holocaust and subsequent genocides, but the challenges we face with the Covid-19 pandemic and the impact it has had on everyone’s lives. It urges all of us to show the better side of our humanity.”

Deputy First Minister Michelle O’Neill said: “The Holocaust is a poignant and powerful reminder of what can happen when bigotry and discrimination go unchecked. Holocaust Memorial Day is an opportunity for all of us to remember the millions of people who were persecuted during the Holocaust and subsequent genocides.

“We must do everything we can to ensure such atrocities never happen again. Holocaust Memorial Day reminds us that we all have a role to play in tackling prejudice, ending division and building a shared future. We must embrace and celebrate difference and diversity in order to create a better society for all.”

As part of HMD 2021, The Executive Office has unveiled a video poem by County Down-based artist Csilla Toldy, which was created last year to commemorate the 75th anniversary of the liberation of the Nazi concentration camps.

The powerful artwork, entitled 'Here I Stand,' is based on a story of a survivor of Auschwitz, Ivor Perl, who was only 11 years old when he was deported with his family. As they entered the concentration camp, Ivor’s mother told him to leave her and join the other queue where his older brother was standing, saving his life.

Csilla, who was born in Hungary, said: “The six-minute video poem, based on the theme ‘Standing together’, not only commemorates the liberation of the camps, but is sensitive to all those affected by the Holocaust and subsequent genocides in Cambodia, Rwanda, Bosnia and Darfur. At the same time, I made a short documentary film which will be used for educational purposes, to teach people about the Holocaust and the dangers of allowing prejudice and hatred to go unchallenged.”

The First Minister and deputy First Minister said: “Csilla’s video poem is a powerful reminder of the horrors of the Holocaust and the unthinkably heartbreaking decisions so many parents were forced to make to save their children’s lives. Her poem and documentary film will be useful tools in helping future generations learn vital lessons from the past.”