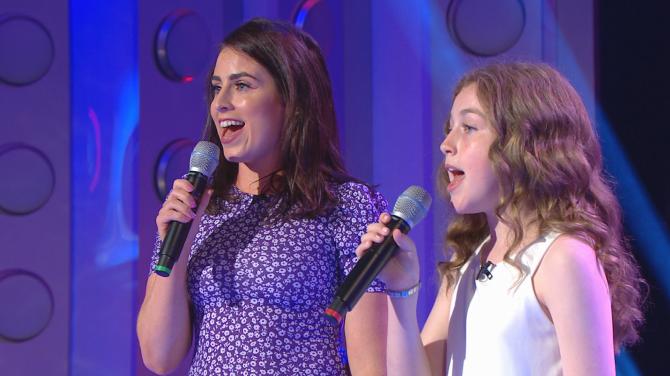 Joleen and Shannon performing on RTE.

A MOTHER and daughter duo from Hilltown have performed together on an RTÉ talent show.

Joleen Copeland and her daughter Shannon sang together on Donncha's Two Talented, a programme where children are challenged with the task of training their parents in a specific talent.

It's no surprise that Shannon chose singing. In the past couple of years, the 13-year-old has garnered much attention online for her musical talent.

Shannon had originally auditioned for the Junior Eurovision last year but her plans came to an abrupt end due to coronavirus restrictions.

In the past, she has also auditioned for The Voice Kids and Britain's Got Talent. Her version of Clown by Emeli Sandé gained a major positive response when it was shared by The Irish Daily Mail.

Luckily, RTÉ got back in touch with her about a different opportunity. This one had a twist - she'd have to sing with her mother Joleen.

Joleen says: “I don’t know where she gets her talent from.

“When I was on stage performing with her, I felt like I was going to take a heart attack.”

The pair performed their own rendition of 'Valerie' together. Shannon also performed 'Into the Unknown' from Frozen 2.

Joleen explained their song choices, saying: "The Frozen song was perfect for Shannon because it really shows of her range and we sang Valerie together because it's the song I felt comfortable with."

Their performance together has received a wave of support online from friends, family and strangers alike.

Joleen says: “I was so proud of her. We got to take nine family members along to watch her perform.

“Ever since the show was broadcasted I've received hundreds of messages of people saying how brilliant she was.”

Shannon isn't the only one to have received recognition. Joleen is a teacher and her Year 8 pupils at St Malachy's have been showing their support.

She says: “I haven't got to see them much because of Covid. One of them told me he'd been on the Late Night Toy Show and I mentioned to him that I'd be on RTÉ soon.

“They've been asking for updates about the performance ever since. They're a lovely group of children.”

St Mark's student Shannon also won an overall character award at the Warrenpoint Feis last year and hopes to perform in Newry's Feis this year if it still goes ahead.

For now, she continues to post videos of her performances on her Facebook page, 'Shannon Copeland Singer'.