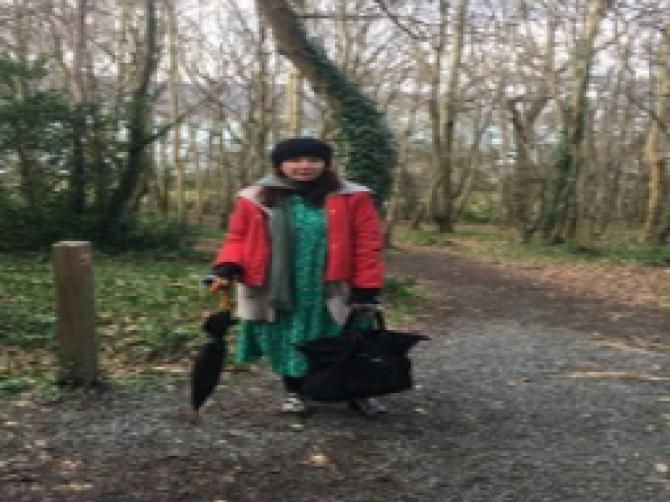 Sinead in costume for 'Bananas'.

A BANBRIDGE drama teacher and public speaking coach has been cast in her first lead role for a professional film production.

Sinéad Lunny says she was delighted to have the opportunity to work on 'Bananas'.

The feature tells the story of Rose, a woman who has been sleeping rough for years and decides to share her tales with the statues around Kilbroney Park.

The Banbridge woman says her latest acting opportunity has reaffirmed her belief to never settle in life. She decided to change her career path after her son suffered with a heart condition which led to her having a wake-up call.

She added: “I worked as a solicitor for about 12 years and I was never really passionate about it.

“I just assumed everyone else felt the same way and it was normal to just tolerate your work but now I'm doing something I really love.”

When her son's condition led her to take some time away from work, Sinéad rediscovered her love of acting, a hobby she had given up in pursuit of what she thought was a more realistic career path.

Now, Sinéad says she has no regrets about taking a risk of getting back to acting. Her efforts as a drama teacher and public speaking coach have been met with major success and positive reviews.

It's also opened up a number of opportunities for Sinéad to meet other creatives.

She added: “It's been great to work with people who are more creative rather than logical and having a chance to express myself.”

The project has been adapted from a screenplay by Rostrevor-based writer Csilla Toldy. She and her partner Alistair Livingstone have revised the story to take place locally.

In the original stage production, the main character talks to a scarecrow but the couple decided it was more fitting to have Sinéad address the statues around the park, to fully utilise the environment they were working from.

Csilla says she was inspired after her time spent working with people in homeless shelters in Belfast and that Sinéad has truly done the role justice.

The film alludes to issues such as addiction and suicide which Sinéad admits to being intimidated by at first.

She says: “The story is told in a really abstract and obscure way.

“I really wanted to portray Rose as a strong character.”

This project is one of many that Csilla and Alistair have been producing in the Rostrevor area.

They established the Light Theatre Company to offer an outlet for other creatives to get together and share their work.

Csilla says: “We're unsure as to when we'll get to show the full film as we're currently in the editing process and Covid has gotten in the way of our plans.

“We're currently working on a number of other projects and we'd like for local actors, writers and other creatives to get in touch with us on or Facebook page if they'd like to be a part of it.”