One-way system under discussion for Warrenpoint 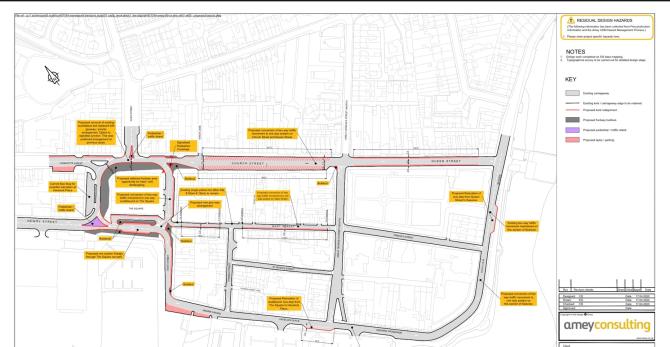 Maps outlining how a one way system in Warrenpoint town centre might operate.

THE next steps are being discussed by the Department for Infrastructure and Department for Communities following a study regarding the introduction of a one-way system to the town of Warrenpoint.

The proposals are at a very early stage with both departments currently engaging with local interest groups.

The plans (pictured) would have the potential to solve ongoing traffic issues along the town Square, Duke Street and Mary Street.

The new system would mean traffic coming in from the Newry direction would be following a one-way system from Fegan’s as far as the Baths.

Traffic driving from the Rostrevor direction to Newry would travel along the front shore and turn into the Square along the Dock wall.

Mary Street would also be made into a one-way route with traffic travelling away from the Square.

The proposals would also introduce extra parking spaces on Church Street with the introduction of drive-in spaces on both sides of the road.

In a statement to the Outlook, a Department for Infrastructure (DfI) spokesperson said: “As part of their remit to provide environmental improvements in Warrenpoint, DfI commissioned a study on behalf of the Department for Communities (DfC) to ascertain the potential impact of changes to traffic flows through the town, including consideration of the introduction of a one way system.

“This study has been completed and the next steps will now be discussed.”

Crotlieve Councillor, Declan McAteer (SDLP) explained he has had reservations regarding the proposed plans.

Cllr McAteer is concerned with the directing of traffic and specifically HGV’s and large vehicles around the promenade area.

“I was of the opinion the promenade should be seen as an area of leisure, focusing on restaurant, bar and café culture.

“And additional traffic would compromise this,” he said.

“DfI responded with data that demonstrated that HGV and commercial traffic coming from the Rostrevor direction was minimal and tourist traffic would be directed to the tourism orientated part of the town.

“Other traffic modelling data provided indicated evening work-time queues of half an hour to get through the town.

“I'm not convinced this is entirely accurate and whether the out working of this data in terms of the proposed one way system is the correct and appropriate approach.

“I do however acknowledge those making the proposals are professionals in the field of traffic management and it was in this vein that I reluctantly agreed to support them in at least consulting the Warrenpoint public, including the shop owners and businesses who will be most affected either positively or negatively by their proposals.

“The outcome of this consultation and debate must be carefully evaluated before any final decision is made.”