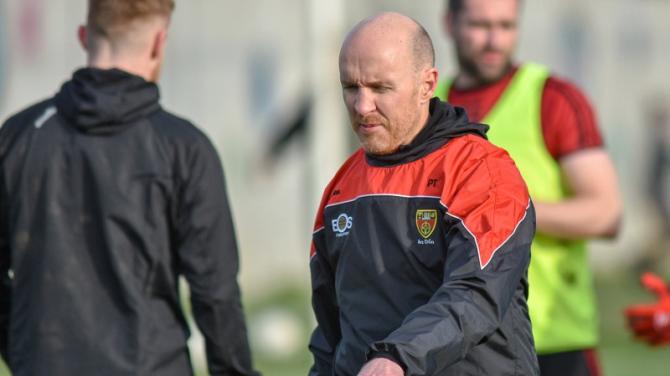 DOWN’S hopes of Division Two survival were dented after Meath put them to the sword today and they will play in a relegation play-off in a fortnight’s time.

Down made five changes to the team that started against Mayo last week with goalkeeper Marc Reid coming in for Rory Burns, while captain Darren O’Hagan and Burren’s Peter Fegan started in defence and Paul Devlin and Liam Kerr made the attack. Meath made a couple of late changes to as Cathal Hickey replaced Ronan Ryan at corner back while Bryan Menton started with Darragh Campion moving to the bench.

Down did well to leave only two points between the teams at the break because it took them a while to get adjusted to the pace of the game.

Meath were reduced to 14 men twice in the opening half, but still they led by two points before Mayobridge’s Cory Quinn opened Down’s account.

The hail stones were bashing off the Athletic Grounds roof when Meath stretched their lead to four points with Jordan Morris, Cillian O’Sullivan and Mathew Costello on target, but Quinn hit back with his second point before the first water-break. Quinn might have netted but keeper Andrew Colgan pulled off a decent save,

Down pressed more in the second quarter and they got some joy from runs by Darren O’Hagan and Caolan Mooney. Paul Devlin converted a free and his Kilcoo team-mate Ryan McEvoy swung over a fine score. Devlin’s second converted free made it 0-05 to Meath’s 0-07 and his third point closed the gap to a point but that’s as close as they got because the Royals took control.

Meath turned the screw in the second quarter and two goals from Cillian O’Sullivan gave Down a mountain to climb. Devlin and substitute Conor McCrickard hit back with points, but Meath were content at keeping Down at bay in the last quarter and last years Division One side stayed on top.

It leaves Down looking their first win next week away to Westmeath.