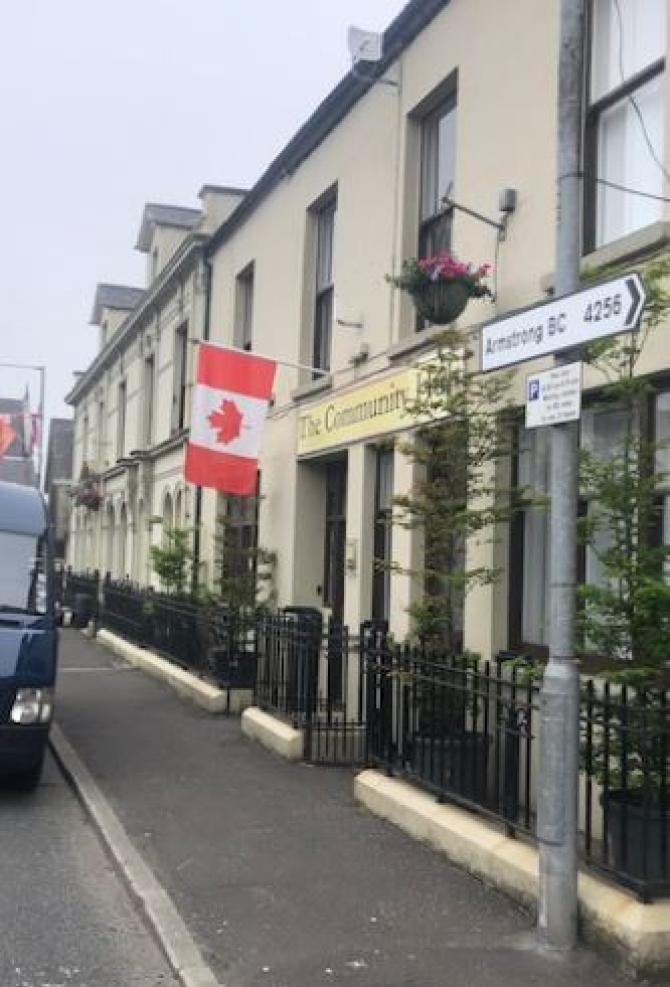 The flag flying from the Community hub in Rathfriland to mark Canada Day.

RATHFRILAND Community Hub has paid tribute to the town's connections to Canada with the display of a Canadian flag outside their building.

The gesture is made every year to celebrate Canada Day on 1 July and Rathfriland's relationship with its sister city Armstrong in British Columbia.

Andy Peters of Rathfriland Community Hub says he sent a picture of the flag to Chris Pieper, the mayor of Armstrong.

He says: “Mr Pieper was delighted with our gesture and he sent us an email expressing his gratitude.”

Catherine was originally from Rathfriland and travelled to the US at the age of 16 where she met and Augustus Schubert, a German carpenter whom she married in 1855.

When Catherine's husband decided to join a group of gold-seeking men to Cariboo in British Columbia, she refused to be left behind and joined them on their journey.

She was the only woman to participate in the treacherous journey and earned herself the nickname 'Lady Overlander'.

Catherine brought her two children along on the dangerous expedition, and was pregnant with her third. She went into labour while riding on a raft down the Thompson River.

On the raft, Catherine was assisted by two native women as she gave birth to her daughter Rose, who was the first settler born in British Columbia.

Towards the end of her life, Catherine moved to Armstrong where she died in 1918.

To this day, she is remembered for her courage and determination, and the important impact she had on the community of Armstrong.

A statue dedicated to Lady Overlander was erected in Rathfriland in 2016 and a group of Canadian representatives, including a direct descendant of Catherine's, travelled to see it.

Mr Peters of the Community Hub says: “Our friends in Armstrong are always pleased to see that we're making sure Lady Overlander's story is remembered.

“Her relatives have thanked us in the past for keeping her story and alive and Mr Pieper has suggested another expedition to Rathfriland hopefully in the next year or so.”

The scheme has been announced by Economy Minister Gordon Lyons.