Police say they are 'not investigating a sectarian hate crime motive' 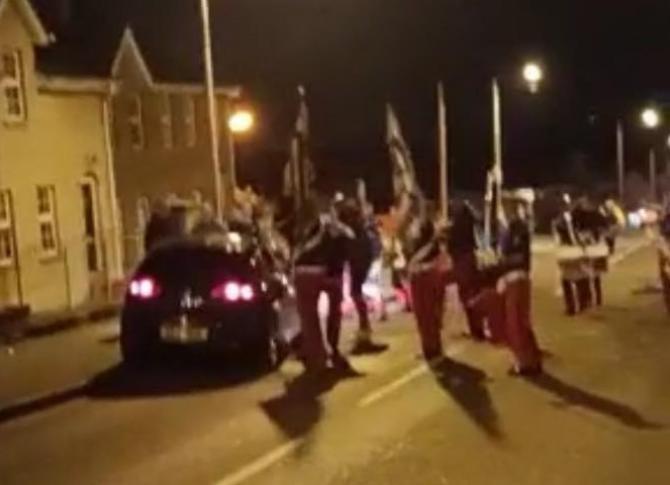 POLICE investigating the incident during last night's parade in Rathfriland have arrested a 16-year-old boy.

Chaos briefly consumed last night's (Friday) 40th anniversary parade of Moneyslane Flute Band as a car sped through the procession as it made its way up Newry Street in the town.

Members of Banbridge based Downshire Guiding Star Flute Band were disturbed by the motorist's actions, with two men sustaining minor injuries during the episode.

Armagh, Banbridge and Craigavon District Chief Inspector Barney O’Connor confirmed a teenager had been arrested on a host of suspected offences

He said: “ Last night at approximately 8:40pm, a black Seat Leon failed to stop, a number of times, for police who were on duty in connection with a band parade in Rathfriland.

"He was also arrested on suspicion of two counts of common assault and other related offences. He remains in police custody at this time.

“At this stage, we are not investigating a sectarian hate crime motive in relation to this incident."

Inspector O'Connor thanked those in the community who had come forward with information and said a "robust" investigation was being carried out.

And he also asked for more people to come forward with any information which may assist their investigation.

He said: “Our officers are continuing to robustly investigate the circumstances of this incident. Officers have already spoken to a number of those present and I know this has been alarming for all those involved.

"I would like to thank those in the community and those involved from the band, who have already come forward, for their cooperation and assistance.

“I would still appeal to anyone who witnessed the incident or who may have footage taken to contact police on 101, quoting reference number 1633 17/09/21. Alternatively, a report can be made online using the non-emergency reporting form via http://www.psni.police.uk/makeareport/