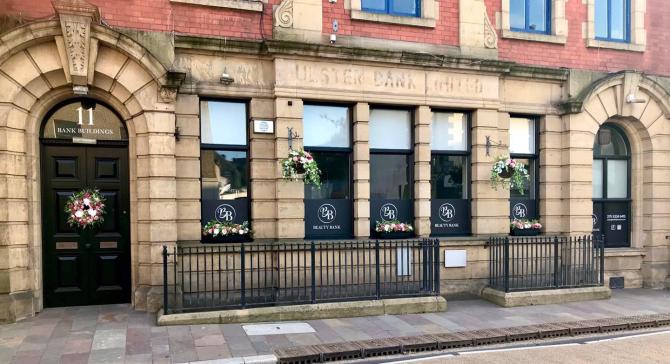 The iconic building has been transformed into a beauty salon and business hub for local independents.

A DROMORE businesswoman has received an overwhelmingly positive reception from the local community after transforming the town's former Ulster Bank building into a beauty salon.

Many shopping districts across South Down have experienced the negative impact of bank closures as fewer people have any inclination to visit their local high street.

As well as a decrease in shoppers, the sight of the empty buildings can often leave areas that were once thriving with business looking like ghost towns.

But one local businesswoman has demonstrated the potential of vacant historic buildings after she purchased the former Ulster Bank in Dromore's town centre and transformed it into a beauty studio.

Allison Savage, owner of Beauty Bank Dromore, spoke to The Outlook about her family's decision to take on the massive project.

Three years ago, when Allison and her partner Kenny Hook first heard the building was up for sale, they decided to put in a bid. Unfortunately, the couple were informed that a higher offer had been accepted.

She explained: “We got a phone call to say we'd lost out but we noticed the signs were still up months later so Kenny got in touch.

“They phoned us back to say it fell through and said if we were still in a position to purchase the building then we could buy it as we were the next highest bidder.”

The next few years were spent preparing the building so it would be suitable for business once again.

Like most residents in Dromore, Allison was a customer of the Ulster Bank all her life and has many memories of visiting the building.

The local woman wanted to preserve the bank's historical features and has been mindful of its status as a listed building throughout any of decisions being while decorating.

She said: “We've worked with the Heritage Trust and building protection to try and keep as much of the building's original features.

“We didn't want to change anything about the building and wanted to keep it in its entirety."