Local Cancer Focus Group marks half century in the community 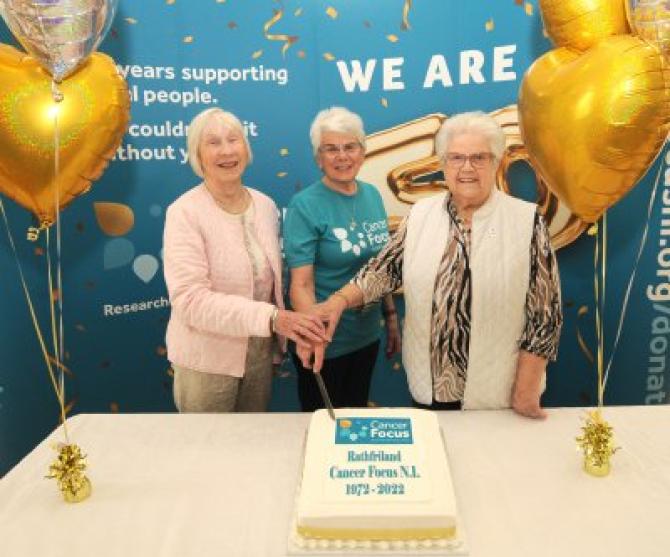 THE RATHFRILAND branch of Cancer Focus NI are celebrating five decades of serving the local community during a celebratory supper and gift presentation.

Representatives of the charity attended a special ceremony to commemorate the group’s landmark achievement on Tuesday, 10 May.

Since its formation in 1972, the Rathfriland Cancer Focus Northern Ireland support group has raised a mind-blowing £599,442 through a raft of fundraising endeavours.

Commenting on this achievement, the group released a statement saying: “Rathfriland Cancer Focus group is proud to have raised the incredible sum of £599,442, since its formation.

“This would not have been possible without the commitment of our local group members, our regular supporters, supporting organisations and our very generous local businesses.”

An inaugural member of the Rathfriland Cancer Focus branch recalls how she got involved in the group.

She says: “Just three years after the charity formed, the Ulster Cancer Foundation as it was known then, it was decided a local group would start up to support the charity.

“I immediately felt it was something I wanted to be a part of; such a worthwhile cause that benefited other people.”

Thanks to the dedication of a group of innovative and energetic men and women, the local Cancer Focus branch has changed the lives of hundreds of people by offering them an outlet of support.

During the evening, Marion also welcomed a former cancer patient, who spoke very movingly about her cancer journey.

She spoke of how she had benefited greatly, both from the practical support and the counselling services she had experienced and she said she now regards Cancer Focus NI as an extension of her own family.

A group spokesperson says: “Over the years, we have come into contact with so many people who have used the support services that we helped to fund, some of our own group in fact.

“It’s just brilliant to be a part of something that helps people when they need it the most.”

Rathfriland has strong links to the Cancer Focus charity. It's an organisation close to the hearts of people in the area, and local businesses in the town have continued to show unwavering support to the group through numerous fundraisers.

The current chairperson of the group also happens to be Rathfriland man, Ivan McMinn, who was present for the 50 year anniversary.

Mr Spratt and Mr McMinn both expressed the gratitude of Cancer Focus NI for the longstanding and continuing fundraising efforts of the Rathfriland branch.

As a token of their appreciation, they surprised the group with the presentation of a garden bench, inscribed: "Celebrating 50 years of serving and supporting the charity and the local community.”

They also updated the group on the current activities of Cancer Focus NI.

Although Ivan currently lives in Belfast, he says the town he grew up in will always be important to him.

In 2021, when the local man was awarded an MBE for his charitable endeavours, he told The Outlook: “Even though I moved away when I was 27, Rathfriland will always be home to me.

“It has a sense of community that you just don’t find anywhere else.”

The representatives of Rathfriland’s Cancer Focus branch credit that sense of community for their successful fundraising campaigns over the years.

The group say much of their work would not be possible had it not been for the generosity of people in the Rathfriland community.

Rosie Forsythe, Community Fundraising Manager for Cancer Focus NI, says: “It is so humbling to have a group that has continued to support our charity for 50 years.

“The good work that we do, quite literally, wouldn't be possible without the essential help of local fundraisers such as the Rathfriland group.

“They have done an absolutely amazing job at constantly rallying the troops to come out and support the charity and we are indebted to them.

“The Rathfriland group members are among the very best.”