Boveedy couple raise over £6000 for Air Ambulance after farm accident 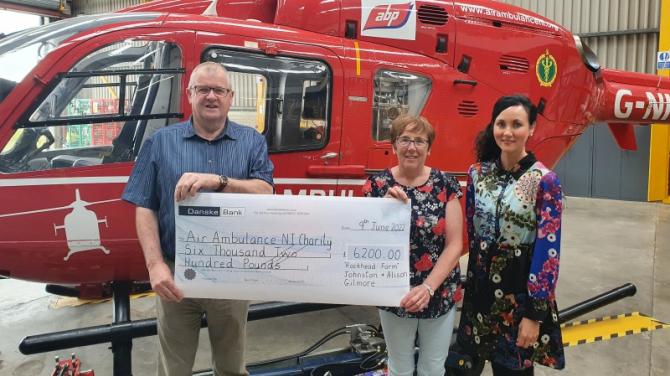 BOVEEDY couple Johnston and Alison Gilmore recently visited Air Ambulance N I at the Maze to present a cheque for £6200 to the charity.

In August 2021, Johnston had an accident on his farm which resulted in some serious injuries.

The Air Ambulance attended in a very short time and the crew quickly stabilised him and transferred him to the Major Trauma Unit in the Royal Victoria Hospital.

Johnston spent two weeks in hospital after his surgery.

The family are glad to report that with months of intensive physio, Johnston has made a great recovery and is back working on the family farm.

In appreciation, Johnston and Alison wanted to raise some funds for the Air Ambulance N I Charity.

Having a small woodland on their farm which abounds with bluebells and other beautiful wild flowers in the spring time, they decided to open it up to the public for a week in May 2022. Neighbours, relatives and friends were invited to come along and enjoy the ‘Bluebells and Birdsong’ in the woodland.

Tea and coffee, scones and tray bakes were served in their garden afterwards. The family were amazed at the number of people who attended and they were delighted to be able to hand over £6200 to the Air Ambulance NI Charity on June 9.

Johnston and Alison would like to thank everyone who came along and donated and other individuals and businesses who sent donations.

They would also like to thank publicly the Air Ambulance crew and the rapid response paramedic who attended the scene on the day of the accident. Also the staff in the Major Trauma Unit and the physiotherapy team at the Royal Victoria Hospital.