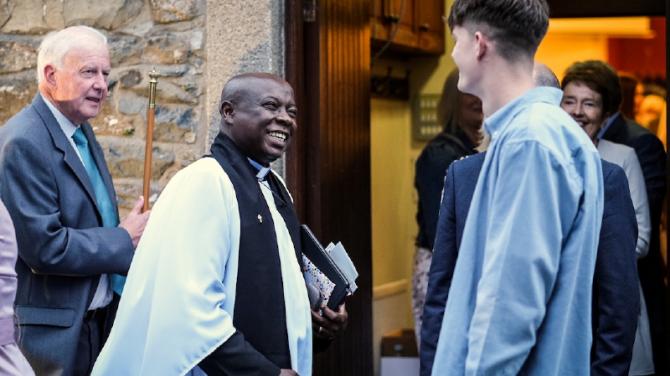 THE NEWLY-INSTALLED Rector of St Johns Church of Ireland, Dromara has described his joy at embarking on a new chapter as he starts to get to work in the area.

Members attended in their numbers as The Rev George Okikiolu, accompanied by his wife, Sharon, was instituted as incumbent for the grouped parishes of Dromara and Garvaghy a fortnight ago, after his appointment was confirmed by the Diocese of Down and Dromore.

Rev Okikiolu, who arrives into the area having served as a pastoral assistant in the parish of Donaghcloney and Waringstown for just shy of three years, spoke to the Outlook about his first two weeks in the job.

“I have settled really well in the community,” said George, who spent seven years living in Belfast, before serving in Donaghcloney Parish Church.

“I have got to meet and chat with all different types of people since arriving here, but I still want to explore much more of the area. Somebody paid for my breakfast the other day which really shows the kindness that there is!” he added.

“Prior to my installation, I attended a meeting of the Kinallen Rural Community Development Association as their special guest, where I was able to hear the concerns and priorities of people in the area,” continued Rev Okikiolu.

Originally from Nigeria, he says his two sons, Oluwafimijoda and Oluwasemiloba, have also taken well to their new surroundings and notes the contrast between city living and the family’s current patch.

“From my observations, in the city, a lot of people are not going to church because they are distracted by other things. But in the countryside, people are ready if the church is willing,” he said.

There are also homes being built in the area. As I embark on this new chapter, I see that there is an opportunity for people to receive the Gospel message and I ask that people in the area pray for me and my family as we settle here and seek to make disciples of them, knowing that the Lord Jesus Christ is our cornerstone.”

Rev Okikiolu would like to encourage people towards @StJohnsdromara on Facebook, as well as to the church’s YouTube channel, where service streams recordings can be found.