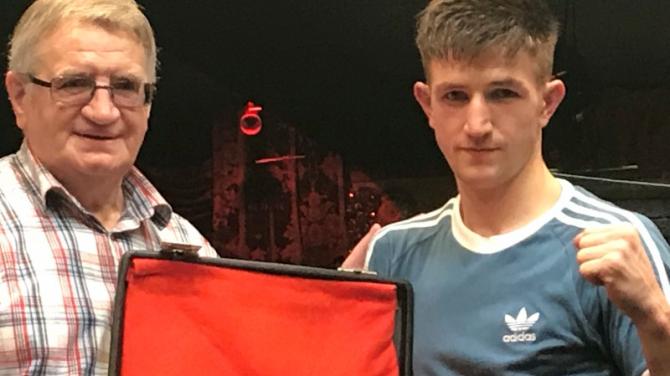 Ryan Lavery is presented with the CJ Creaney belt from Ulster representative, Eugene Duffy for Boxer of the Championship.

The ex-Rathfriland club boxer was also handed the Boxer of the Championship, such was the quality of his displays.

On Tuesday evening Ryan, who now boxes with Holy Family GG Belfast due to being at college, was pitted against six-time Irish champion, Errigal’s Dominic Bradley.

Credit has to be given to both lads who had the large crowd of supporters on their feet from the opening bell.

Lavery took the first three-minute round producing a variety of combinations stunning Bradley with his quality.

The second round was no different with both lads again showing quality, with Bradley at times showing why he is a six-time Irish champion and quite possibly nicking the second.

Ryan left the best to last as he lifted his game with a stunning last round, showing an extreme level of fitness and skill to have his hand raised in victory and securing a final berth.

The final was a quieter affair as Lavery controlled all their rounds and gave his Donegal opponent a standing count in the third round to have his hand raised and be crowned Ulster Lightweight Champion in his first season as a senior boxer.