West Down GP brings racing to a conclusion 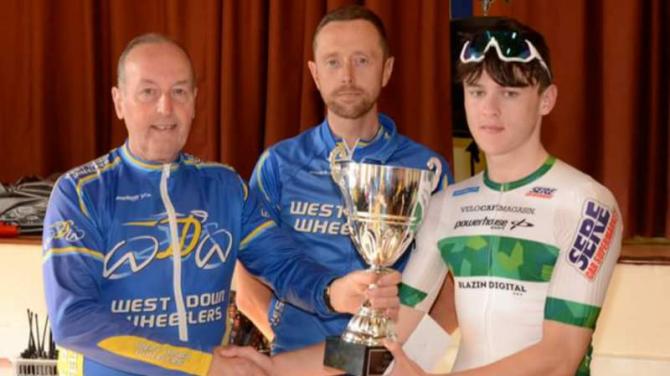 KATESBRIDGE was a blaze of colour last Saturday (29 September) with riders descending upon it.

The reason being West Down Wheelers were running their annual West Down GP.

The A Race had six laps, taking in approximately 64 miles, with the Rathfriland Hill thrown in on the last lap.

The A4s had five laps with Rathfriland Hill again on the last lap, while the Masters had three laps.

Massive thanks to each and every rider who took on the very tough West Down GP with both races having to endure the brutal Rathfriland Hill on their last lap.

The big race containing A1, Vets, A2s and A3s had six laps to complete the B Race while the A4s had five laps and the Masters had three.

With it being the end of September it was always a tall ask to see if we could get enough riders to hang on a week or two so we could run the races, which they did and that’s was very much appreciated.

Adam was the winner, going off on his own then dropping back into the bunch again. He eventually went away again on his own to the finish line. Des Woods came in second place and John Heverin came in third.

The winner of the A4s was Liam Crichton (Velo Cafe) with Gavin Green Cuchulann in second.

Gavin travelled up north to race even though he had a race on his doorstep and he said this is a far better race, which is something we appreciate.

We would like to take this opportunity to thank those people who gave up their day to help run the GP, no doubt without them we could not run it. To the car drivers Wilkie, Ally, Mackers, Clydie and Andy, the two cComms Drew and Mario. To our finish line photographers Bronagh, Sammy and Brendan, the tea ladies all the static marshals, St John Ambulance. To James and the motorbike outriders massive thanks. Thanks to Bloat (Bike Shak) for broomwagon and service crew also for his help in putting up signs and the barriers.

To sum it up, it was a fantastic day’s racing overall, very well run and marshaled.