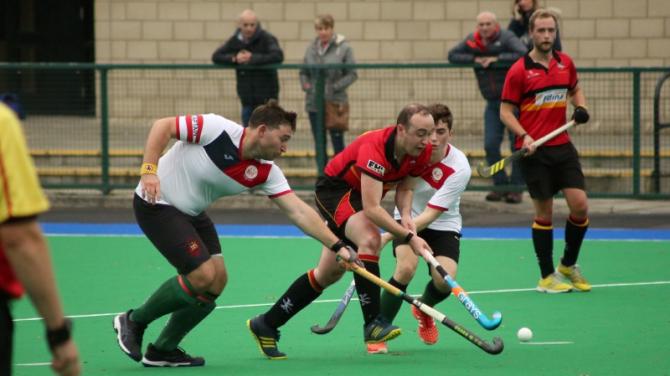 Banbridge plough through the opposition.

BANBRIDGE 2XI, sponsored by Edina, played hosts to NICS 2XI in the first round of the Irish Junior Cup in front of a vocal crowd at Havelock Park.

After a narrow win in Kilkeel the week before, Bann knew a performance was required to advance to the second round of Ireland’s premier cup competition for second 11 teams.

The match got underway in typical cup hockey fashion with a nervy start from both teams. However, it wasn’t long before the home side stamped their authority on the match by controlling the ball for the remainder of the half through central mid-fielder, Hugh McShane.

NICS put up a stellar defence whilst attempting to catch Banbridge out on the breakaway. After 30 minutes of sustained pressure by the men from Havelock Park, the tie went into half time all square at 0-0.

The second half got underway again with the home side dominating possession. Eventually the deadlock was broken by seasoned goalscorer, William Malcolmson who finished off a flowing move on the reverse stick.

Banbridge patience had paid off with NICS struggling to keep up with the pace after 40 minutes of defensive running. Goal two came from midfielder John McCague after a breakaway found him one-vs-one with just the Civil Service goalkeeper, Marc Bennett to beat.

With the game firmly in Banbridge hands, forward Mark Campbell stepped up to fire home a third goal from close range to seal the deal.

A few minutes before the end a foul in the circle resulted in a penalty stroke for the home side. Up stepped centre-back and playmaker Adam Marshall to score confidently to round up the match at 4-0.

An excellent second half performance sees the men in red advance to the second round of the Irish Junior Cup, a cup that has eluded Havelock Park since 2005 as eagerly pointed out pre-match by coach Scott McCandless.