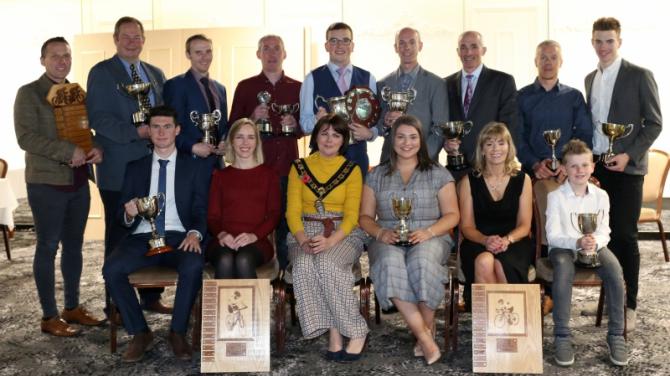 This was a night which celebrated the achievements of the riders throughout the year.

The chairman, Maurice Mayne thanked all the sponsors who have supported the club throughout the year and all the volunteers.

In total 29 awards were given out. We were delighted the Lord Mayor Councillor Julie Flaherty was available to come and present the awards.

It was good to see Peter McBride and James McMahon take the Mac 2 up trophy for the second year running.

The ever-popular John Buller collected three trophies in his first year riding in the under 23 category.

Paul Hannigan, who is only in his second year of competing in club events, picked up the prestigious Skelly Cup for the 14-mile time trial.

The overall race league winner for 2018 was yet again Stephen Fitzsimmons, who never missed an event and also collected two other trophies.

It was great to see some of the younger talent in the club collect awards, with Christopher Neill in his first year with BCC collecting the Downey Cycles Youth BAR Cup and also the Dinghy Cup Roadman’s BAR.

Charlie Glover collected the Outlook Junior BAR and the Glen Dane Cup Junior Points, another great season for him.

Young Ryan McBride, who has been magnificent on the Mountain Bike and the Cyclocross bike this season, proudly collected the Eddie Sands MTB Cup.

The eight-year-old has a great future ahead of him.

Matthew Teggart was recognised for his international achievements and received the Tommy Evans Cup whilst Christina Towell was named the Club Person of the Year. Pictured along with them are outgoing club secretary Paul Hannigan, Lord Mayor Julie Flaherty and Maurice Mayne club chairman.

The 2018 International Performance Rider -Thomas Evans Cup went to Matthew Teggart a well-deserved win for the rider, who has rode with Wiggins team and seen some great finishes and podium places.

The final award to be given out was for Club Person of the Year and this was presented to Christina Towell for her endless work collating results, acting as chief judge at open races and volunteering duties.

Next year the club will celebrate its 75th anniversary, which will be marked by a special celebration, a great achievement for the club.