Boys to the four 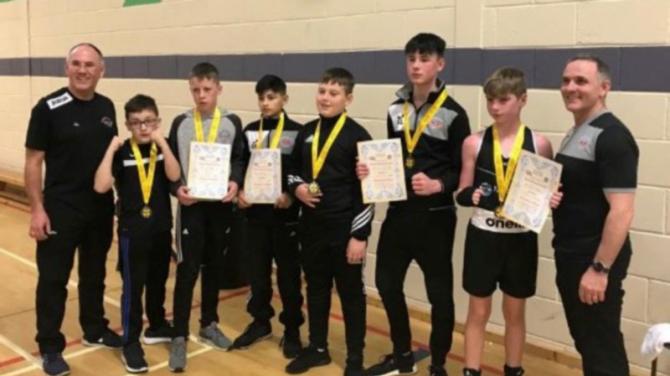 THERE was a super weekend’s boxing at the Boy/Girl 1/2/3 nine county Ulster Championship in Raphoe, Donegal.

All four boxed superbly to advance to the finals.

First up out of the six was Bobby-Shea boxing John Boyle from Clonard.

This was a very close contest, with Boyle coming out on top 2-1.

Yaqub was up straight after and produced a cracking display, forcing a count on his man in the third round with a wicked body shot, leaving his game opponent unable to continue.

Regan Devlin was up an hour or so later and although boxing a great fight, found himself on the wrong side of a 2-1 defeat.

Boy 2, Liam Grant was in the contest of the day and pulled a gutsy performance out of the bag.

Under pressure from the opening bell, the south paw from Kilkoo boxed brilliant in the second and third, landing cracking back hands catching his ever-advancing Ballymena Saints opponent every time.

This will be a real confidence booster for the ever-improving lad.

Shay Lavery stepped into Ring A around 2.30pm and was coming off a semi-final stoppage the day before and was in a confident mood.

Shay produced three great rounds winning by a unanimous decision. This will also be a boost for Shay who is growing nicely into the sport.

Up last was Odhran Clancy who was pitted against old foe, Paul Hanna of Cookstown BC. Credit has to be given to both lads for producing a cracking contest.

At only 13, both boxers showed skills beyond their age with Clancy picking some cracking countershots as Hanna missed at times.

This was a super win for Odhran who learned a lot over his two contests.

All-in-all it was a great weekend. Thanks to the families who made the journey to support the club, the boxers and the McGlyn Transport, Strabane for sponsoring our trip. Well done everyone.

Success continued for the club with two more champions being added to the season’s growing list.

Donagh Keary and Odhran Clancy lifted the prestigious Belfast Box Cup title with top-drawer displays on the weekend of Saturday 3 and Sunday, 4 November against Crumlin and Antrim opponents respectively.

Both lads showed touches of class as they eased to unanimous decisions winning all three rounds.

Next up for the club boxers is the Louth Championship where 14 boxers have entered, with boxing taking place this weekend. Good luck to everyone involved.