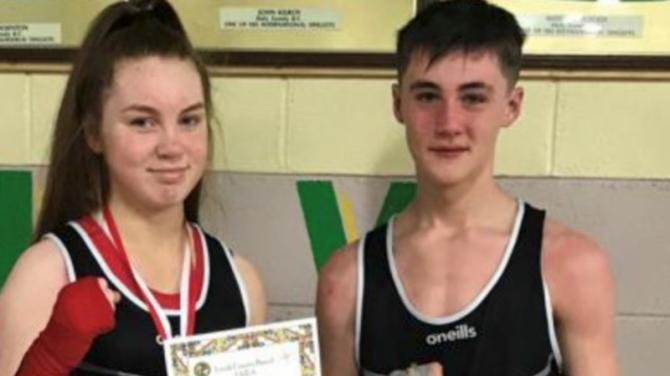 Mollie Sheppard and Ruairi McDonald after their wins

The club entered 14 boxers with four receiving walkovers and one lad, Ulster Champion Odhran Clancy having to withdraw due to sickness.

This left nine competing boxers which started Friday evening. First up for the club was Bobby Shea McNulty in a quarter final.

McNulty was in fine form and stopped his man in round two of the contest after a sustained period of pressure.

Fifteen-year-old Daniel Waugh stepped into the ring at what was a new weight class for him of 63kg.

Daniel put in a terrific performance and should feel very hard done by after going down 2-1 in this quarter final bout.

The ever-improving Yaqub Kahlifa was up next and he too was on top form in his semi-final, also stopping his opponent with solid head and body shots.

Boy 2 boxer and recent Ulster champ Liam Grant put in a great shift to advance to the final by over coming his Armagh opponent 3-0.

The very hard working orthodox was on top of his Navan counterpart from the opening bell in this semi-final encounter, forcing a standing count in the second round and another in the third, leaving the referee calling a halt to the contest.
Saturday had three new faces in the ring for Rathfriland ABC and Yaqub Kahlifa boxing his final and winning later that evening.
Mollie Sheppard had a straight final against current Irish champion, Molly Bennet of Bracken BC Balbriggan.
This was a tough scrap from start to finish with our own Mollie having her hand raised in victory and adding a Louth title to her very impressive boxing CV.
Conor Donnelly was also in fine form cruising to a unanimous decision in his semi-final, setting up an intriguing final against the strong Silverbridge boxer, Michael Loughran.
Bobby-Shea McNulty put in a great shift in his semi-final but was narrowly beaten and had to bow out at this stage.
Up last on Saturday was Ruairi McDonald who boxed a punch perfect bout also to advance to the final on Sunday.

Finals day
With two titles already in the bag the club had high hopes of adding more.
This was to be the outcome with Liam Grant, Georgia Lavery, Conor Donnelly and Donagh Keary producing top-class displays and all having their hand raised in victory.
Ruairi McDonald was to be on the wrong side of a split decision but can take heart from the close contest after a gutsy performance from the 16-year-old kid.
All-in-all another great championship and displays from the club’s impressive boxers. Well done everyone.
Up next is the Ulster Nine Counties this weekend in Derry for our Boy/Girl 4/5/6 boxers, where again we hope to add more titles to our rapidly growing list.