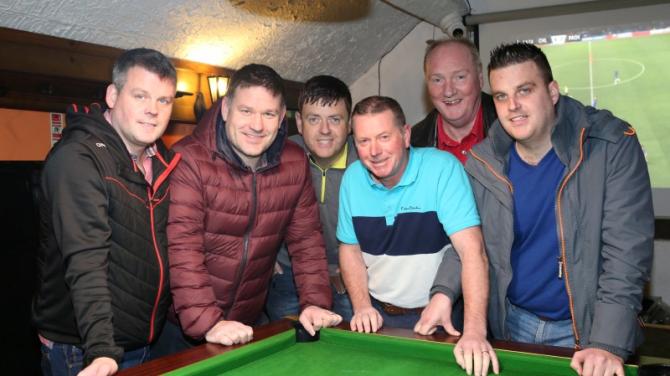 The Grants Bar team who are competing in the Hilltown Pool League.

THE Depot returned to winning ways with a hard earned win away to the Anglers.

Paul, Tony and Gary gave them the advantage at the break.

M McClean and BJ kept the home side in touch. Paul and M Wards exchanged wins as did Niall and M Wards. Jim took the last to earn the win for the visitors.

The ‘Cows’ proved to be very stubborn as Grants sought to maintain their charge at the top of the league.

Dessie won the first for Grants but Darragh and P Gribben put Tipsy in front.

Decky and Mickey regained the advantage for Grants at the break. Darren and Mickey extended their lead, but P Bloomfield pegged one back for the home side.

Konrad and Decky won the last two for Grants to keep them top of the league.

The Tipsy Cow pool team who played against Grants Bar

Macs recorded a big win against rivals Grants to leapfrog them in the league.

Seamus won the first for Grants but then S Milligan and Liam put Macs ahead. Martin responded for Grants but Anthony gave Macs the advantage at the break.

The second half was all Macs as S Milligan, Gareth, S Murray, Anthony and Liam all won for a fine win.

The Square were too strong for the INF in this one-sided affair. Declan won the first but Davy replied for INF. But J Morgan, J Travers and Connor all won to put them in control at the break.

They pressed on in the second half as Declan, J Morgan, J Travers, Connor and James all won to seal a big win.

Corner House made Minny’s fight for their lives in this exciting match. Decky, Paddy Pierce, Aidan and Michael had them 4-1 up at the break.

P McCabe replied for Minny’s. Decky and Paddy Pierce stretched the lead and Minny’s were in trouble.

But the home side rallied as BJ, Sam and Finto won the last three to rescue valuable points.