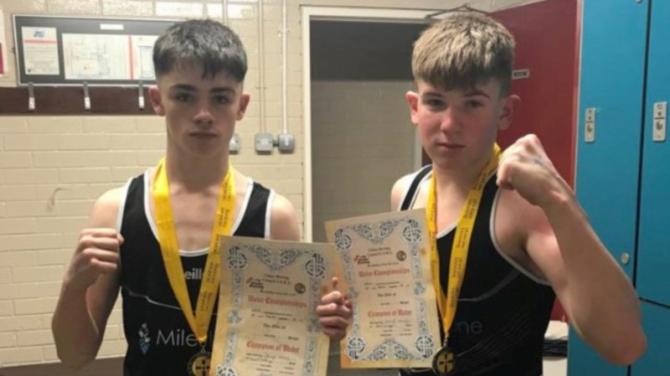 Donagh progressed to the final after a semi-final win the previous week against the talented Banbridge boxer, Martin Maughan.

In the final he was pitted against the ever-improving Eddie Loughran of the famous Holy Family BC, Belfast.

Keary dazzled from the opening bell, producing excellent boxing skills throughout the contest to be announced the winner on a 5-0 unanimous decision.

Fifteen-year-old Hilltown lad, Daniel Waugh was in top form in this championship, having won his quarter final and semi-final also the previous week against tough opponents from Donegal and Cookstown.

In the final, Waugh came up against old foe Rory O’Gorman of St Malachy’s BC, Camlough.

The previous three meetings had went to O’Gorman but this wasn’t playing on the mind of Daniel as he went to work from the opening bell, landing stiff body shots on the taller opponent.

Daniel could be seen growing in confidence as the two minute round ticked away.

His persistence paid off after he caught O’Gorman with a thunderous right hand to the body, bringing an abrupt end to the contest with the St Malachy’s lad unable to continue.

This was a great win for the hardworking Waugh and will be a confidence booster for the second half of the boxing season after Christmas.

Other entrants in the championship were Conor Donnelly, who went down 5-0 in his final against the hard-hitting Oisin Wallace of Donegal.

Eoin Cooney boxed a great fight against Aodhan Douglas of Townland Crumlin, but fell to a 4-1 decision in his semi-final.

Morgan McNulty was also on the wrong side of a split decision against the tall Zoe McGlone of St Paul’s Belfast.

Ruaira McDonald also fell short in his semi-final. Although producing good second and third rounds, it wasn’t enough to convince the judges to have his hand raised.

All-in-all it was another good championship for the club with experience gained.

Up next are the Antrim 6s from Sunday, 16 to Wednesday, 19 December where Rathfriland ABC will have seven boxers entering, all hoping to add their name to the growing list of champions within the club.