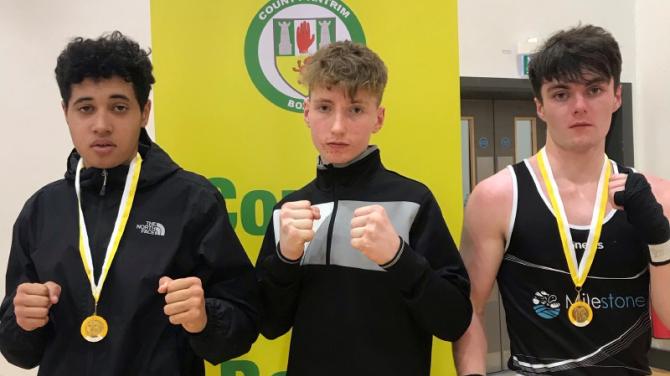 Aodhan Cunningham stopped his opponent in his semi-final and was very unlucky in his final going down 2-1 to his North Down counterpart after a fast-paced action-packed final.

Bobby Shea McNulty fell into the same weight class as his club mate Yaqub Kahlifa, where they met in the semi-final with Kahlifa getting the nod in a very close no holds barred encounter.

Laim Grant won his straight final bout against a game All Saints Ballymena boxer taking all three rounds. Patrick Bowen, who was coming off a week’s sickness, battled hard in his semi-final and final to lift the Youth 1 66kg title.

Seventeen-year-old Lorcan Sloan boxed a quarter, a semi-final and final over three evenings and was in top form to be crowned an Antrim 6 youth 60kg champion.

Club coach Bobby Lavery was very happy and impressed with his charges and said: “It’s great preparation for the lads for our upcoming club show on Saturday, 12 January in Annaclone GAA Hall.”

Also at the show this weekend will be their other senior boxers who have lifted five Ulster novice titles, six Ulster open titles, six Louth titles, three Antrim titles and three Esker female titles since September 2018.

There are some cracking matches made for the show so the club hopes to have a good support from the community to see these kids showcase their skills. First bell at 8pm.

Rathfriland ABC received a welcome gesture from Milestone proprietors, Tom and Ann McAvoy with the sponsorship of new strips.

The timing couldn’t have been any better with the club’s annual club show coming up this Saturday evening.

Rather than the usual blue and red colours, the club picked a black and white strip which got the thumbs from all the boxers in the club. The committee would like to thank Tom and Ann for their continued support towards the club.

Anyone who would like to sponsor a contest at the show this Saturday evening can do so by contacting club coach Bobby Lavery on 07808175612.

They hope to see you all on Saturday night supporting the club and its talented boxers.