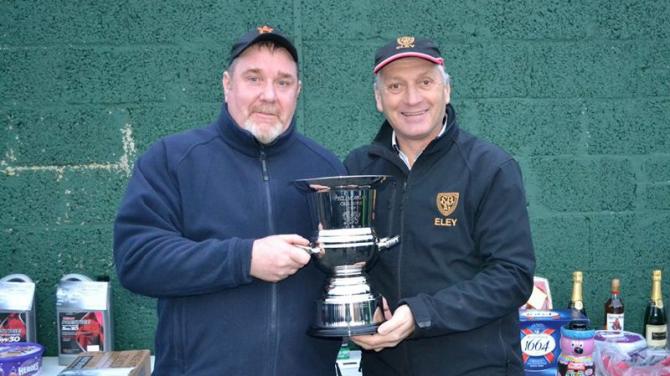 High Gun Geoff Dale was presented with the Phill Morgan Challenge Cup by Morgan himself.

The event, which has become an annual occasion, was this year held over Friday 28 and Saturday, 29 December with twenty-bird DTL competition drawing shooters from far and wide.

Among those in attendance was former DTL world champion Phillip Morgan, making the trip from Wales for the event, which also incorporated the Phill Morgan Challenge Cup; the prestigious silverware was up-for-grabs for High Gun, with a whole host of prizes on offer too.

Weather for the two days was fantastic, with bright and calm conditions making for great targets. Friday saw a total of 41 lines, with no less than 21 shooters making Saturday’s final with the 20/60 score.

Attendance over the event was superb with another 38 lines shot on Saturday, resulting in another 20 finalists.

With such a big shoot-off required, the final began from 1pm on Saturday with shooters’ eyes on the silverware.

The 20/60 scores were soon whittled down to six, who had shot another perfect 20 in the final.

Final places were as follows

Prize-giving was a busy part of the day, with so many prizes sponsored.

The club would like to thank all those who donated towards this, and too to those who helped with the running of a very successful two-day event.

A total in the region of £1500 was raised for the Northern Ireland Air Ambulance, which is a fantastic total.

Many thanks to all the shooters who attended and contributed to this very worthy cause.