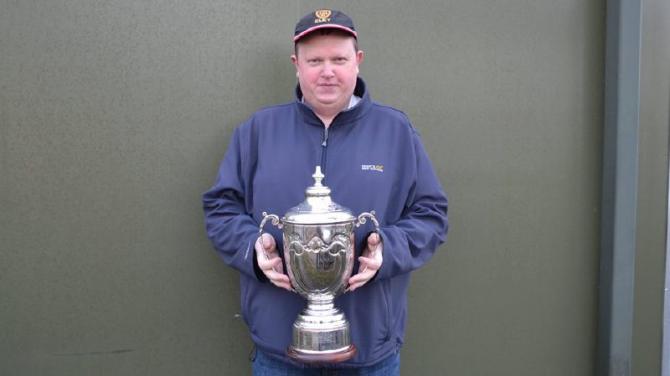 THE William Douglas Cup was the order of the day for the latest 100-bird on the Northern Ireland DTL calendar, held Saturday, 12 January.

With blustery conditions making for testing targets, the sixty shooters in attendance were in for a challenging day.

Despite this, the in-form Keith Montgomery was flying with seventy-five bottoms. He would go on to drop two targets in his last twenty-five, but an impressive showing nonetheless.

Ronald Sloan and Jim Doherty were proving hard to separate with 295 scores apiece, which was to be the height for the day.

The pair went head-to-head in the shoot-off where they both recorded perfect 25/75 scores.

Ronald Sloan and Jim Doherty pictured before the shoot-off.

A round of single-barrel competition would determine the winner; Sloan would score twenty-three which was bettered by Doherty’s twenty-four, leaving him High Gun, and the William Douglas Cup winner.

Local shooters were among the prizes, too.

Class A was won by Ivan Williamson, while Frank Rooney and Matthew McBride were 2nd= in B class with 271 scores apiece.

Class A winner Ivan Williamson was presented with his prize by Harry Knox.