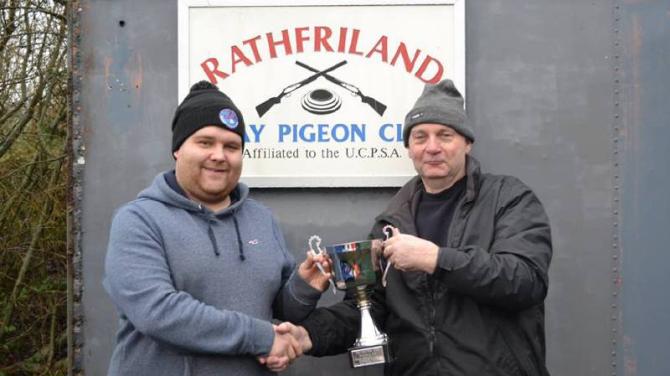 RATHFRILAND Clay Pigeon Club was the host for the latest 100-bird DTL, at which the prestigious Willie Hughes Cup was up-for-grabs.

With 70 shooters in attendance, competition would be fierce with calm conditions making for excellent targets on the day.

The headlines were set from the first few squads of the day. Peter Saunders scored an excellent 100/298 which looked like a strong contender from the outset.

Ronald Sloan was showing good form too at seventy-five but lost four points on his final line, leaving him short.

Darren Bell is a man never far from the prizes, and he was in fantastic form just two points down going into his final twenty-five.

Bell was last year’s winner of the silverware, and he was surely hoping to retain. He would finish the day with a 297 score however, leaving Saunders as High Gun and Willie Hughes Cup winner for 2019.

Willie Hughes was in attendance for the day, and very kindly donated cartridges and medals for each class winner, a fantastic gesture.

Scores on the whole were impressive, with approximately 30 shooters making the 90s.

There were numerous local shooters among the prizes, too.

Rathfriland regular Raymond Graham was winner of class A with 294, while Sharon McCauley took top spot in B class having shot 289. Ronald Sloan finished third equal in a tight AA class.

Raymond Graham was presented with his prize by Willie Hughes.