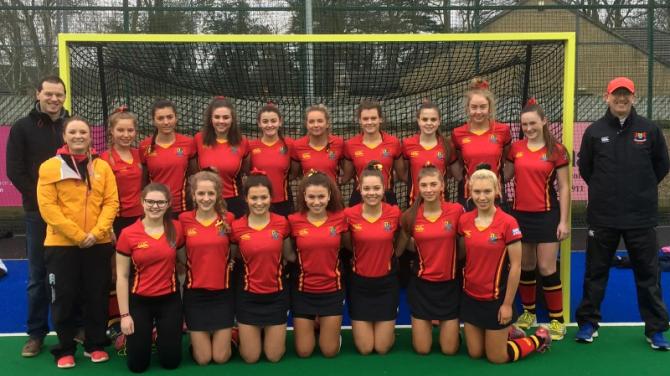 Banbridge Academy Girls’ Hockey team is through to the Ulster Schools’ semi-final next week.

Banbridge were keen to put aside any nerves and get off to a good start. Within minutes Katie McDonald blasted a penalty corner strike passed the Wallace ‘keeper to open the scoresheet, with both Sophie Mount and Jodie Simmons finding the net in a flurry of goals just 10 minutes later.

The local girls remained strong and had most of the possession which was rewarded with another well drilled penalty corner that saw captain Nadia Benallal find her way onto the scoresheet, leaving the half-time score at 4-0.

The Academy girls remained focused in the second half, determined to hold on to their strong lead.

Wallace also showed great determination, fighting back from a couple of short corners but, thanks to goalkeeper Rebecca Spence, Banbridge kept a clean sheet.

The fourth goal was a true reflection of team effort with Ellen Reid connecting well with Gemma Hassan to help Sophie Mount find the net once again.

The final goal came from a penalty stroke, taken comfortably by Ellen Reid, and bringing the final score to 6-0.

The match has given the girls a confident build up to the Ulster Schools’ semi-finals but they are well aware that they will have to perform at this level or better if they are to reach their goal of reclaiming their Ulster Champions title back.

The semi-finals take place at Lisnagravey HC on Wednesday, 13 February.

Their opponents will be decided by a draw between Rainey Endowed or Strathearn, who are already through to the semi-finals, and either Methodist College or Ballyclare High School who will play for the last semi-final place.