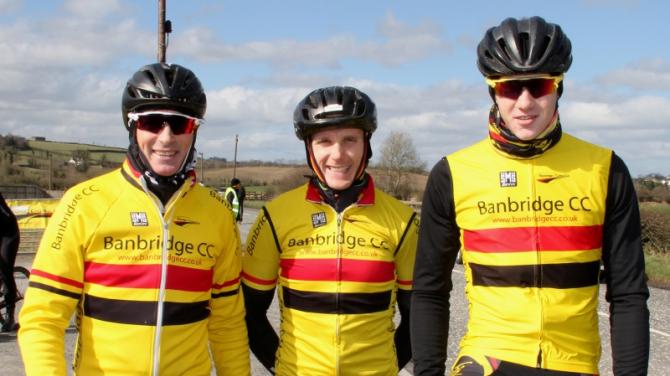 With over 150 riders along with support crews and race officials, Annaclone village is expected to be a hive of activity both in the lead up to and following the midday race start.

Two races will be on offer for competitors; a handicapped race catering for A1, A2 and A3 categories and a mass start A4 support race.

The ‘A’ race for A1, 2 and 3s will be six laps of the traditional rolling circuit for a total race distance of approximately 50 miles/80 km, with the winner being awarded the Eddie Sands Memorial Cup.

The ‘B’ race for A4 men and A3/A4 women will cover five laps of the same course giving a total distance of approximately 40 miles/65 km.

Sean Travers and the Travers family have been long-time supporters and a sponsor of Banbridge Cycling Club and the Annaclone GP and the Banbridge club are delighted to add a winner’s cup in Sean’s name to this popular event.

Speaking ahead of the race event director Aaron Wallace said: “It’s fantastic to see the introduction of the Travers Cup to the event for 2019, we owe a great deal of gratitude to Sean Travers for his continued support of the Annaclone GP and indeed Banbridge Cycling Club.

“The Travers name and the Annaclone GP go hand in hand and being able to award the Travers Cup at the event seems rather fitting.”

The ‘A’ race has attracted a list of names which will be well known on the Irish racing circuit. Topping the bill will be Chris McGlinchey who has this year signed for the UCI Continental team Vitus Pro Cycling p/b Brothers UK.

McGlinchey famously won the ‘B’ race at Annaclone in 2015 before taking the Irish scene by storm. He’ll be joined by former An Post professionals Angus Fyfe from Omagh and local man David Montgomery of Dromore.

Another former An Post professional, Ronan McLaughlin, will head the newly-formed Team Dan Morrissey-McCarthy Insurance Group squad and count Banbridge’s James Curry among his team mates. Following a strong couple of years based in France, Curry will be keen to produce a noteworthy result on home territory.

Another Banbridge resident, Lindsay Watson of Powerhouse Sport, who led the Irish Elite ranking for a considerable stretch in 2018 looks to have maintained his strength over the winter months and will be looking to start the season off well.

John Buller is the latest Banbridge CC talent to roll off the production line and joins one of the most exciting new Irish teams in recent years, Team Bioracer-DHL-FR Services. The team has ambitious plans for the year and like many of the spring flowers, they may well come to bloom early this weekend if young Buller gets a clear line to the finish and is able to utilise well known sprinting talent.

In the ‘B’ race Peter McBride, Richard McBride and Ian Cochrane will be keen to get some early points on the board with a view to upgrading during the season.

Both races are expected to finish between 1.30pm and 2pm outside the Hawthorn Inn.