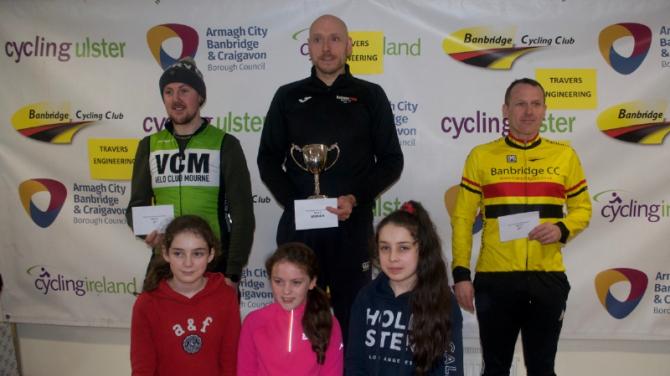 KATESBRIDGE upheld its reputation as the coldest village in the country on Saturday when Banbridge CC hosted their annual Travers Engineering Annaclone GP.

Being the road race season opener the event is well used to being promoted in cold and poor conditions, but with the recent mild weather and record-reaching levels of warmth in February, many were hopeful of a favourable climate.

Alas the winds changed on Friday evening and the tradition was upheld; muddy faces and wet backsides were the order of the day!

130 riders signed on for the two races on offer which would be run over the well-known rolling circuit which starts from the Hawthorn Inn, taking in Richie’s Bridge before a sharp left through Annaclone Village, Mays Corner and Katesbridge before returning to the Hawthorn Inn via the Ardbrin Road.

Grimacing through the tough conditions for Annaclone GP

Race 1 was a handicapped event for the A1, 2 and 3 categories covering six laps and race 2 was a scratch race for the A4 and women covering five laps.

Race 1 attracted some of Ulster’s finest, many of who were starting the season off in new teams and would be keen to show off the new colours at the earliest opportunity.

The A3 was the first bunch to start, followed by the A2s at two minutes and the A1s a further three minutes adrift.

The A2s were the quickest group over the opening laps but once the A1s got warmed up they got to work on laps three and four and reached the front of the race with a little over one lap remaining.

Banbridge leading the group into Katesbridge

At this stage a quartet consisting of Ronan McLaughin (Dan Morrissey/Pactimo), Lindsay Watson (Powerhouse Sport), Chris McGlinchey (Vitus Pro Cycling) and David Montgomery (unattached) moved clear on their own and worked well together.

Despite some brave efforts to bridge the gap from local riders James Curry (Dan Morrissey/Pactimo) and John Buller (Bio Racer/DHL/FR Services) along with 2018 winner Marc Potts and Angus Fyffe (Caldwell Cycles) the four would remain clear.

On the final approach to the line it was newly-signed UCI Continetal level rider McGlinchey who opened up the sprint.

Ex-professional McLauglin gave chase but McGlinchey had the strength to hold on and take his second victory on the Annaclone circuit, following his win in the A4 race four years ago.

Montgomery completed the podium with Watson close behind in fourth. Curry made one final effort to win the bunch gallop to claim fifth.

Dromara Cycling Club in action at the Annaclone GP

They worked well together and continued to increase their advantage as the laps counted down. Sean Harrigan of Foyle CC tried in vain to bridge the gap but the combined effort of the leading four was too much for the solo move to make an impact on.

As they entered the final lap their advantage had grown to three minutes. With a little over 1km to go West Down man Castles made his move and as he reached the final rise to the line, had enough of an advantage to enjoy his first road race win in front of some dedicated and rain-drenched supporters.

Banbridge man Peter McBride took a well-earned second place ahead of McAllister of Velo Club Mourne, who outsprinted Richard McBride of Banbridge. Harrigan held on for fifth place with only seconds to spare over the main bunch.

One of Banbridge CC’s own competing in the Annaclone GP

The Banbridge volunteers once again proved their worth on such a cold and wet day, with all junctions well covered with static marshals, the bunches chaperoned by motorbike marshals and led by the lead car drivers who may have been envied for their in-car heating and solid roofs, but even they deserve gratitude for their time and commitment to help with the promotion of this long-standing event, which has been run on the same roads for over 50 years.