Frank puts pedal to the metal with new race team 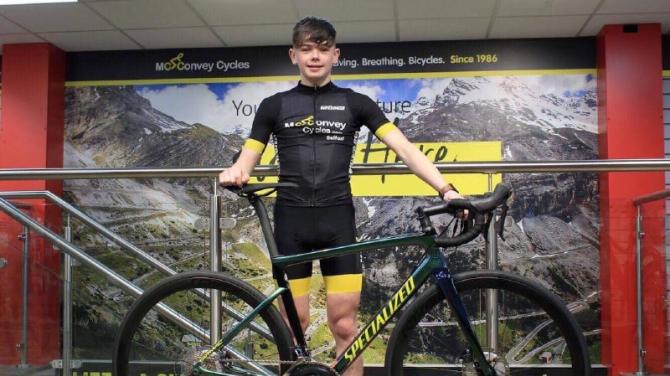 Road racing teenage cyclist, Frank Finley was scouted by McConvey Cycles to be part of their U16 team for the 2019 season. The 15-year-old, from outside Rathfriland, has now been rewarded with a spot in this season’s U16 McConvey Cycles Race Team.

After only a year of competitive road racing, teenage cyclist Frank Finley has pedalled his way to the top and is set to saddle up as part of one of the country’s finest amateur racing teams.

A keen cyclist from an early age, 15-year-old Frank, from outside Rathfriland, has switched from off-road to concentrate on road cycling over the past couple of years and has now been rewarded with a spot in this season’s U16 McConvey Cycles Race Team.

The Grallagh Road lad told The Outlook that he “has had many outside influences which have given him the encouragement” to be where he is today.

His proud dad Colin, who has been racing Enduro and Downhill for 25 years, said that “he can only do so much”.

“It is thanks to the team at Cornerstone Cycle Club for taking him out on the road over the past few years and for putting in a lot of patience, time and encouragement with him that has given him the confidence to succeed.

“And he has taken great inspiration from local riders and all their successes including Lindsay Watson, Gareth McKee and John Buller as well,” said Colin.

Frank has been riding mountain bikes “since he was on two wheels” and a couple of years ago he moved to compete in road races.

“I was out on the road on the bike and he started to come with me. We joined Cornerstone Cycling Club and it is now approaching the one-year mark from when he completed his first competitive race in the U14 category.”

Since then Frank has never looked back and has completed the P.J. Logan Race in Coalisland as well as criteriums in Banbridge and Lurgan, starting to show his form in the Eikon Cycling Festival last June.

Last August he completed in the Irish Championships and it was there that he was scouted by McConvey Cycles.

“Following that they offered Frank a ride with Specialised, who are one of the premier manufacturers in the world, for the 2019 season,” he said.

With the road racing season finishing towards the latter part of last year, Frank was then invited to be part of McConvey Cycles Cyclocross team, racing the Ulster and Irish Championship.

“Cyclocross if somewhere halfway between mountain biking and road racing - it usually takes place on a track in a muddy field, incorporating technical climbs and roots but Frank loves it.”

Despite the differences, Colin says that it is good and gives Frank a “very good skills base”.

“Mountain biking and Cyclocross is great for balance and skill. I would say that is part of the reason why he is so successful - because of his history with mountain biking.”

As well as studying for his GCSEs at New-Bridge Integrated College, the fourth year pupil will have to complete in possibly one or two road races a week up to June including all 10 of the Banbridge Inter-cycle League and the Errigal three-day race.

He will continue to compete on the road until September when the Cyclocross season then commences.

On top of that Frank will also train six days a week.

“There are so many people who have helped Frank get to where he is today, including all those who have previously supported him and those now, including Timmy Graham from Strength Farm whoalso trains him and teaches him core and power.”

Frank was also selected to take part in two recent training camps, one in Cork and the other in Gran Canaria.

“He had six days of riding, which covered 300 miles and a 40,000ft climb. He showed tremendous form and convincingly outperformed me!” said Colin.