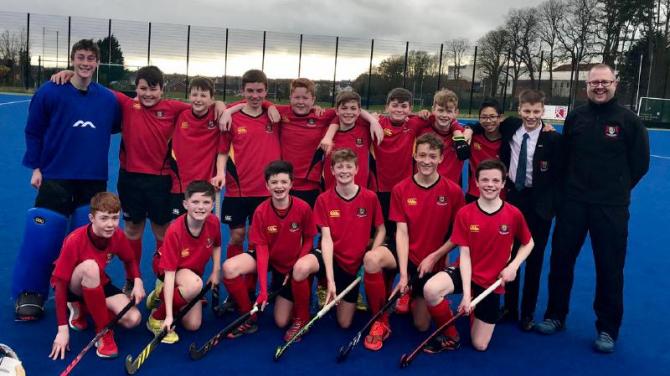 The Banbridge Academy U13 squad after their semi-final win at Wallace with coach Mr Colin Walker. They face Campbell College in the Bannister Bowl final.

THE Academy hockey tradition remains as strong as ever with yet another team progressing to the Ulster Schools’ Bannister Bowl final.

The squad coached under former pupil and now Master-in-Charge, Mr Walker, have had a sensational season with 17 wins to their credit and bulldozing the opponents away with skill and speed.

The team has a wonderful blend of strength and depth and will be buoyant to face up to Campbell College in the final to be staged at Playball, Stormont today, Tuesday, 26 March at 1.15pm.

The side made the difficult trip to the blue turf when they played Wallace High School in the semi-final. The team started brightly with Baxter, Cash and Briggs carefully marshalling the defence to allow Stevenson the freedom to carry and use intelligent passes from the word go.

Some neat slick hockey steered Brownlee and Walker in the direction of goal and but for some quality defending, the Academy could well have been home by half-time. The goals did arrive though with Moles, Spencer and Brownlee piercing holes in the Wallace circle, before a reaction turnover left Reid sitting pretty to open the account from close in, 1-0 Academy.

The Wallace forwards showed some fine skill and Daniel Murray caused a sweat when well-placed only to mis-trap and see his effort slip away.

The continued pounding from the high press eventually paid off with the Academy forcing another penalty corner in the 37th minute and Stevenson made no mistake as the Portadown youngster dragged home his trademark bullet, giving the Lisburn ‘keeper no chance and putting the game beyond Wallace.

The introduction of Jonah and Noah Lutton, alongside McCrum and Carr, allowed fresh impetus and with time edging away, it was Brownlee who continued to terrorise the Lisburn defence.

There was still life in the game though and some superb tackling from Briggs and Baxter thwarted several pacey attacks before Spencer and Walker linked well to put Brownlee in and his resulting shot forced another penalty corner.

The routine was another productive effort and the rebound found Adam McKee in form and he swung home first time to give the Academy a well-deserved 3-0 win and more importantly stamp their name in the final.

The squad would like to thank all the parents and indeed grandparents who travelled to support them as well as Mr Clarke who gave his voice and time freely at the game. The depth of the squad was evident with Callum Clements in particular standing out with his new set of skills - deputising for the injured Denver Golbey in goals - two young men with real potential to earn an Ulster shirt in the not-too-distant future.