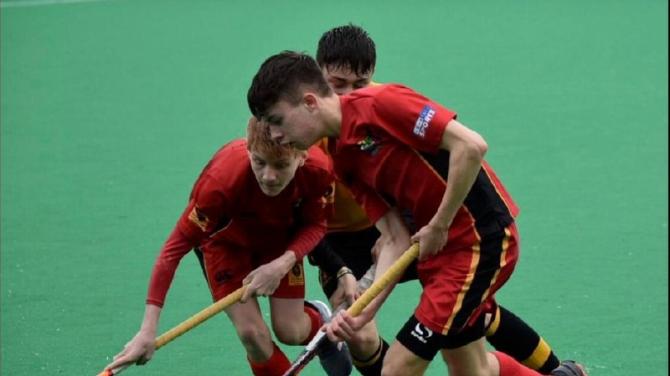 The U14s' Simon Ferris scored the winning goal in the Ferris Cup semi-final.

IT was a very highly-anticipated semi-final replay as the Academy Hockey boys hosted RBAI at Havelock.

The RBAI side has been red hot this year - unbeaten and although on the ropes in the first encounter during extra time, they had the recovery period to fully reflect and iron out any evident mistakes the Academy side created.

This reflective period was also used wisely by coaches Cordner and McCandless, and some vital tactical shifts saw a somewhat different approach to the replay.

The game started very brightly for the Academy and in front of a vocal and fierce crowd the octane tempo was relentless. The forward trio of McKee, Pollock and Collie began to carry with purpose and link well, forcing two backhand chances well denied by the Instonians ‘keeper.

Continued pressing of the ball and unforced errors allowed Rainer and Dobson to capitalise and two excellent pieces of neat passing hockey forced the first penalty corner of the contest. The slipped option to Collie was well executed but again found the visiting ‘keeper in fine form with a flexible right foot block to keep the game scoreless.

The Belfast side grew into the game and some very physical midfield tackling resulted in Dobson and Cousins both feeling the brunt of illegal challenges and reducing RBAI to 10 men as half time approached. Some good play from the Academy saw Cunningham, Moles and Murphy create time and space and allow Pollock freedom to terrorise with and without the ball - his pace giving Inst a real headache.

Nevertheless, the visitors did make some wonderful attacking runs of their own and the corner tally levelled - the turnover onto a foot forcing Rainer and Part into a fine double save to leave it level at the half-time interval. Half time: 0-0.

Words of reinforcement arrived from Cordner who has his own fair share of experience against RBAI in cup competitions. The emphasis was on stepping the tempo up a notch again and not being dragged into a conflict of decisions and rather to settle on the ball and make better decisions when good possession allowed a clear opportunity to score or upgrade.

The team was urged to close space and close down faster and to expect a swarm approach to the Instonian attacks - and so it was to prove to be.

The defensive unit had to be simply superb in defence and with physicality a major influence, the likes of Cousins, Rainer, Pollock and Hamilton all felt the visit to the pain locker and new legs from both teams began the game of cat and mouse with shots at both ends being well saved by the ‘keepers, and the open and pacey game being spurred on by the now accumulated huge crowd of past pupils and parents from both schools.

And so it edged into the last 10 minutes and some ill-discipline began to creep into both sides, as tired legs gave way to streetwise moves - resulting in the Academy being reduced to 10 men.

This seemed to galvanise the team, however and with Simon Ferris being a constant thorn in the Belfast side, his initial turnover fed Dobson who made a decisive run down the left, before doubling back and delivering a fine cross ball to Ferris who got the deftest of nicks to beat the advancing ‘keeper and see his ball roll into the open goal - along with the dramatic diving attempt to clear by the RBAI defender, sending the crowd into meltdown with only two minutes remaining.

Would it be enough to seal a magnificent win and put the Academy boys into the Ulster and indeed the Irish Schools’ U14 finals?

It seemed that all would be chucked at the Banbridge boys - and so was the case as Ben Farson replaced Collie up top and Stevenson replaced Cunningham in the defence as the bus began to line up for parking.

It was all or nothing as tackle after tackle from Moles, Murphy, Hamilton and Stevenson gave Inst slim hope. The opponents produced some great attacking play and forced another short corner in the dying moments but once again Rainer, Pollock and Part all stood firm and denied the equaliser.

With injury time being added for stoppages the game took a twist as first the width of the post saved the Academy from a superbly taken shot and then with just seconds left it would be Matthew McKee who would find himself upended when through on goal.

The result was to be one of jubilation for the Academy supporters, players and parents as the final whistle blasted and the side absorbed what was a taste of senior hockey - played against a top quality side on a surface worthy of the spectacle and in front of a bumper crowd - a wonderful advert for schoolboy hockey.