Rathfriland's Donagh is champion of Ireland 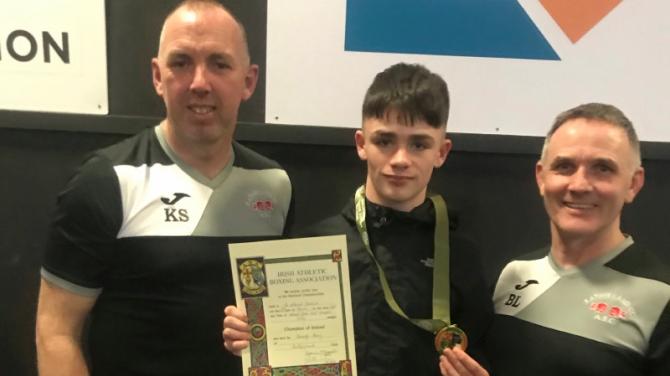 RATHFRILAND ABC’s Donagh Keary is the champion of Ireland after collecting his first Irish title.

The 14-year-old secured a first Irish title for the club since its reformation in 2014 with three punch-perfect performances at the National Stadium in Dublin.

Along the way he beat two reigning Irish champions in thrilling encounters both by unanimous decision, raising his confidence as he progressed to the final.

Donagh will now start squad training with the Irish schoolboy team at the High Performance gym in Dublin at the weekend with the hope of securing a place which will take him to the European Championship in May.

Another entrant in the championship was 15-year-old Georgia Lavery at 46kg, who had a straight final with four-time Irish champion and European bronze medalist, Breada Quilligan.

This turned out to be one of the bouts of the evening with both girls giving it their all. The result didn’t go Georgia’s way as she was beaten on a split decision but Quilligan in her own words said “that will probably be my toughest fight this season”.

The club coaches are extremely proud this season with all their boxers and their attitude in preparation for tournaments and championships.

Up next is the Antrim Boy 1/2/3 and Girls 1-6 championship in Belfast which is a qualifier for the All Ireland Championship, which is held during Easter week. Good luck to everyone entering.

This coming Sunday, 7 April the club will be holding an end-of-season show in Annaclone GAA Hall commencing at 1pm sharp.

The Marie Sheppard Memorial Cup will be presented to the Boxer of the Year along with Runner-up Boxer and Most Improved Boxer. This promises to be a great day’s boxing and the club hopes to see a full house supporting the kids.