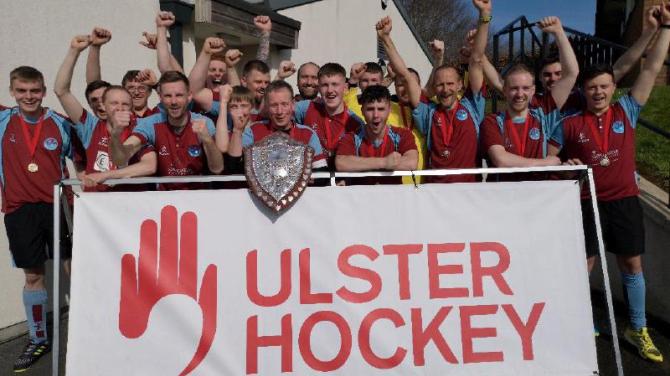 KILKEEL playing Mossley in a final has been somewhat of a common theme recently, with both 1st teams meeting each other in the Kirk and Anderson Cup finals last season.

On those occasions they both went to penalty runs after a draw, so it was going to be interesting to see if this game would have a similar outcome on what was a stunning day for hockey at Stormont.

The men from Mourne began the game really well and found themselves 1-0 in the opening five minutes, as Michel Pobloth slammed home at the second attempt from a penalty corner after his first shot was saved.

It was the perfect start for Kilkeel who sensed that Mossley hadn’t started so they attacked with purpose and vigour with the front trio of Gareth Burns, Andrew Chambers and Gary Graham causing issues for the opposition’s backline.

Andrew Chambers celebrates Kilkeel’s first goal in the first minute of the final.

Kilkeel won themselves another penalty corner a few minutes later and once again they made it count as they made it 2-0.

Michel Pobloth once again saw his first shot saved well by the Mossley ‘keeper, but as he parried the ball into the air, young Jedd Campbell was on hand to score the rebound from what seemed to be a near impossible height to make it 2-0.

It was a dominant start to the game one that they could have only dreamed of, but they knew Mossley were soon going to start to get back into the game and they forced ‘keeper, Darren Gallagher into a number of decent saves.

Michel Pobloth, Christopher Chambers and Andrew Wilson in the midfield were working tirelessly to keep supporting both their defence and attack whilst keeping the ball to ease the pressure on their back line.

Mossley were growing into the game as it went on and they eventually broke through shortly before half time to make it 2-1, which is how it stayed at the break with the game finely poised.

Kilkeel had begun the first half really quick and they did exactly the same in the second as they won another penalty corner a few minutes in.

Once again Michel Pobloth was the target and his first shot was saved, however the rebound he struck with ferocious power smashed against the backboard leaving an echo around the pitch to make it 3-1.

It was the ideal start to regain their two-goal cushion but they knew their concentration was going to be needed for the rest of this game if they were to become the winners.

THE second half was spent mostly defending for Kilkeel, but the backline of skipper William Quinn, Keith Bingham, Darren Herron, James McConnell, John Mckee and Tyler Lee Wilson combined with Darren Gallagher in goal made some terrific tackles, blocks and saves to keep the two goal lead in tact as the game entered the final 15 minutes.

However, no sooner had this time come, Mossley reduced the deficit once again to 3-2 to really set up a tense and nervy finish

Ben McMillan, James Robinson, Stewart Cracknell and Gary Graham were really trying hard to keep the ball in the Mossley half when they had the chance up front, but it was easier said than done as the Newtownabbey side had renewed confidence and energy in chasing the ball down and regaining possession.

Kilkeel were backs against the walls at times in the closing stages and with only moments left in the game, Mossley found the greatly coveted equaliser they had been searching for to make it 3-3 and send the game to penalty runs.

For most of these players involved it would be their first taste of penalty runs and all the drama that comes with them, so you could forgive both teams for being that little bit more nervous given what was at stake.

Mossley went first and scored their opening one, but the ice-cool composure of Keith Bingham ensured Kilkeel also scored their first run.

The second set started well for Kilkeel with ‘keeper Chris McKee who came in for the penalty runs making the first of his several saves, but the 3s couldn’t take advantage of this so it remained 1-1 after two.

The nerves were there for all the crowd to see as both sides missed and scored over the next three sets with Andrew Chambers and Gary Graham scoring in these sets for Kilkeel, which led to sudden death with score being 3-3 after the first five.

This meant Kilkeel would now be going first and the sixth and seventh set were both missed by Kilkeel, however Chris McKee was equal to both the Mossley attempts to keep his side alive in the final.

Up next was the youngest player on the pitch, Jedd Campbell but he showed incredible maturity and guts to score with a great reverse to fire his side 4-3 up, unfortunately Mossley scored as well to level it at 4-4 after eight sets of runs.

The ninth set once again showed the pressure getting to the players as both sides missed their respective runs.

So it came down to the 10th run. Up first for Kilkeel was Andrew Chambers who scored in convincing fashion which meant if Chris McKee could prevent Mossley from scoring then Kilkeel would win.

In the past when these situations have arisen, Kilkeel ‘keepers have a knack of being the hero and delivering when their team needs it most.

This was no different as young Christopher McKee denied the Mossley attempt and after a nerve-jangling 10 sets of penalty runs, Kilkeel were victors in the Junior Shield final.

It is a day that will live long in the memory of the players involved that day and it continues to show the winning mentality that is growing throughout this great club no matter which team it is.

Everybody at the club is extremely proud of what the thirds have achieved with this terrific victory to bring yet another trophy/shield back to the kingdom of Mourne.