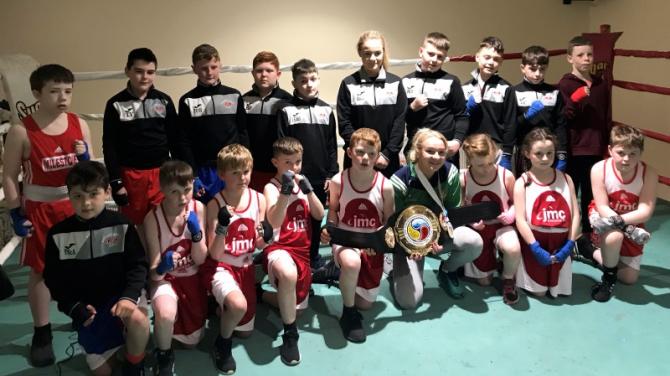 Rathfriland ABC juniors who put on great displays at their end-of-season show.

RATHFRILAND juniors put on a fantastic display of boxing against opposition from Gilford BC, Phoenix BC Lurgan, Lisburn BC and Banbridge BC in exhibition bouts.

All the boys and girls showed off their skills which they have been working on from last September and didn’t disappoint the large crowd in attendance.

Special guest, five-time European Gold medallist and 15-time Irish champion, Amy Broadhurst from Dundalk presented the trophies on the day, with all the boxers and coaches getting photos with the boxing role model.

Award winners for the season were:

Lorcan Clancy - Boxer of the Year and winner of the inaugural Marie Sheppard Memorial Cup.

Well done to everyone involved and special thanks to everyone who helped on the day from sandwich makers to Easter raffle ticket sellers.