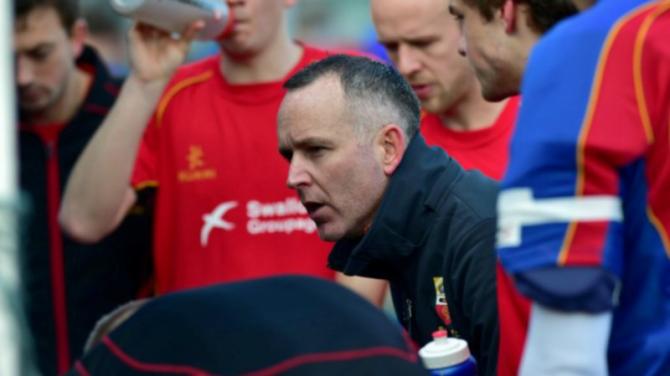 Banbridge Hockey Club has confirmed that Mark Tumilty is stepping down from his role as head coach of Men’s hockey at the club at the end of the season.

Mark informed players and the Executive Committee of his decision following the Men’s 1st XI EYHL semi-final game at the weekend.

Tumilty stated: “After nine seasons as head coach at Banbridge Hockey Club, the time has come for me to step down.

“I have thoroughly enjoyed my time coaching the Men’s 1st XI at the club and the decision to leave has not been taken lightly. However, I feel that this is an appropriate time to hand the reins over, to allow me more time to spend with my family and to allow someone else to further develop the current group of players.”

Mark added: “It has been a privilege to work with the Bann players past and present, the coaching staff and the management team at Banbridge Hockey Club.

“While there have been many highlights in my coaching career, in particular I would point out the EHL Round 1 at Banbridge and taking part in the European tournaments at the Dragons and Eindhoven; winning the Irish Senior Cup in 2015 and lifting the IHL title in 2010/11. Also, the 2016/17 squad was an exceptional group of players and it was a privilege to coach and work with them and see them deliver both the Irish Senior Cup and Irish Hockey League title.

“Although I am stepping down from the head coach role to focus on my family, I will continue to support the club in whatever capacity I can and look forward to seeing continued success at Banbridge Hockey Club.”

In addition, under Mark’s leadership and guidance, 11 of his players played at Senior International Level with Eugene Magee representing Ireland at the Rio 2016 Olympics.

Paying tribute to Tumilty, Banbridge Hockey Club President Jo-Anne Lyttle said: “Mark has informed us of his decision to step down from his role as head coach and while we are disappointed that he is leaving us, we fully understand his position.

“Mark has been an extremely dedicated coach, putting in many hours each week of coaching to ensure that the team had the best training opportunities provided and he is leaving with a list of achievements which is the envy of many coaches.”

“We have been privileged to have such a committed individual working with the club who has been able to produce top results with the Men’s 1st XI.

“Mark has the ability to produce successful performances from both seasoned internationals and young players just entering the playing panel which has been key to our success throughout recent years.

“He has also supported our junior and ladies’ sides and has always sought to deliver for the club as a whole. We sincerely thank him for all his work and support over the past nine years and wish him all the best for the next chapter.”

Banbridge Hockey Club Executive Committee will now set up a sub-group to work on recruiting a new head coach and more information will be announced in due course.