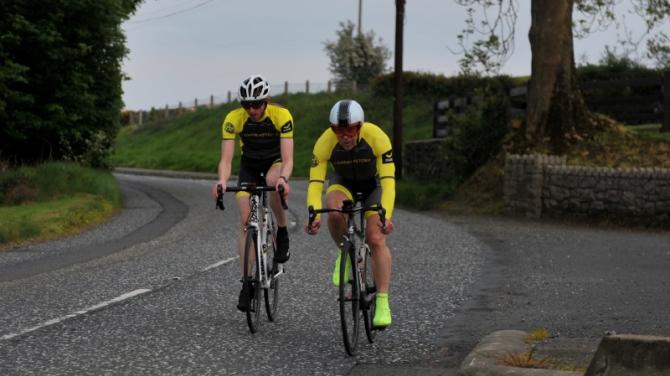 Riders from Cornerstone Cycling Club in action at the 2UP Team Time Trial (TTT).

Banbridge Interclub league held event three on the planned Loughbrickland to Banbridge venue via the Lissize Road. It was a full-on affair with another great turn out of 61 riders.

Originally planned as a 17-mile mid-distance test, the event was shortened by the series committee, to 12 miles and a finish in Annaclone, owing to community respect and a safety concern further along the route.

On the night weather conditions were great for racing, 16c, a cool breeze and nice dry roads. The event starts beside the lake at Loughbrickland, heads along the rolling hills on its way towards Rathfriland, before turning on the Lissize Road, to head back towards Banbridge via Annaclone. Plenty of little kicker hills and a fast finish running down from Mays Corner gave all a sturdy test.

With the best four pairs to count for each club, it was going to be tight with little likely or expected to separate the top honours. With the chips down and all in, it was VCI whom took top pairing with yet another strong performance from rising talent John Davidson (A3), whom powered his way to the top with William Strain (A4), whom admitted it was a bit of a white knuckle ride for him.

Just 22 seconds covered the top seven teams which shows just how close and how little can make the difference. Just a few poor gear changes, or changeovers within the pairs could have made the difference.

Only eight seconds back were second on the night Peter McBride and James McMahon of BCC, they had two seconds over Stevie Fitzsimmons and Mark Stewart BCC and they had just three seconds over Mark Johnston and Neil Seffen of VCI. Incredibly tight.

There were stories too of punctures and riding flat to the finish and of touched wheels and sadly a crash involving BCC rider, Brian Hannon. Both examples of just how committed our riders are and the narrow edge we all ride on. Brian is doing well by the way, nursing some cuts and grazes.

BCC took the honours with a combined team score of 19, VCI second on 25, TVR third on 55 and CCC just piped to fourth on a team score of 56.

Our thanks to all our marshals and support staff including vehicles, whom once again keep us in business.

We’ve now got a one-week break before being back Wednesday, 6 June with a Crit event in Banbridge Town Centre.

Please note this event will have a reduced field, we would ask that if not racing, you come along to support your riders and the event which includes an Ulster Crit Championship race.