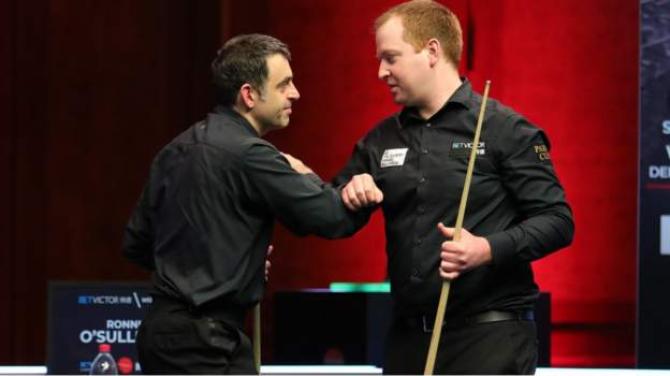 EVERYONE loves an underdog and Antrim snooker player Jordan Brown rightly hogged the headlines in the past week after his stunning success in winning the Welsh Open.

It was a classic sporting rags to riches story, considering the unsung Ulsterman’s lowly world ranking of 81 and the fact he was a 750/1 outsider to triumph in this tournament.

Well though he’d done to get there, Brown was up against the most successful player in the sport’s history in the final so few would have given him much chance of a fairytale ending.

When the legendary Ronnie O’Sullivan took the match to a deciding frame, Brown’s best chance seemed to have gone just like FA Cup minnows often fade away in replays.

However, the man whose nickname is the ‘Antrim Ferrari’ wasn’t to be denied and, in fairness, the often outspoken O’Sullivan was strikingly generous and gracious in defeat.

The fact favourites don’t always win and that strange things happen is part of the unpredictable delight of sport compared to the scripted stuff served up in cinema or theatre.

Of course, more often than not, the big beasts come out on top but, every now and then, often when we least expect it, the little dog has its day and we can’t get enough of them.

In individual sports, some magnificent champions must feel hard done by with crowds regularly rooting for their underdog opponents, just because variety is the spice of life.

The same applies in team sports, providing it isn’t some side which we support that is on the receiving end of an upset, and there are many memorable examples which come to mind.

The FA Cup has always proved fertile ground for giant-killing exploits in earlier rounds but two of the earliest finals your columnist can recall also delivered huge upsets.

Coventry shocked Spurs in 1987 and, the following year, Wimbledon’s ‘Crazy Gang’ of Vinnie Jones et al beat Liverpool with Lawrie Sanchez scoring the only goal of the game.

As a sports journalist, it was a privilege to be in Windsor Park many years later to watch little Norn Iron, with Sanchez as manager, turning over England and Spain 12 months apart.

However, those famous one-off victories couldn’t compare for me with covering the amazing journey of the unfancied Ulster rugby boys who won the European Cup in 1999.

In awful form when the competition began, Ulster’s largely homegrown mix of pros and amateurs saw off star-studded French sides Toulouse and Stade Francais along the way.

That season’s boycott by the English clubs couldn’t detract from Ulster’s success because Toulouse and Stade were the top teams in northern hemisphere rugby at that time.

Being mistaken for a victorious Ulster player by the then First Minister David Trimble in the changing-room after the semi was probably my most surreal moment of a lifetime in sport!

Another was standing in Rome in the middle of rugby fans from Munster on Paddy’s weekend 2007 watching on telly as the Ireland cricket team beat Pakistan in Jamaica!

That historic triumph was eclipsed at the next World Cup four years later though when Kevin O’Brien blasted a stunning century as Ireland chased down a huge target to defeat England.

As a long-time advocate for female sport, it would be remiss not to mention two stunning triumph for Irish women’s teams at World Cups in rugby and hockey in the past decade.

This writer was in Worcester when Ireland lost 79-0 to England in 2002, which puts in context the remarkable achievement of the girls in green in overcoming New Zealand.

Before that 2014 clash in France, the Black Ferns hadn’t lost a World Cup match for 23 years so hearing the news after being cocooned away at a wedding was barely believable.

Four years later, the Irish hockey team, featuring my neighbour Lizzie Colvin, with a friend Roisin Murphy as physio, came from nowhere to reach the final of the World Cup in London.

Like the rugby women with Fiona Coghan, that hockey side had a fantastic captain in Katie Mullan and there will always be a wonderful bond between those involved in those set-ups.

Boxing was actually my first sporting love so James ‘Buster’ Douglas knocking out the hitherto invincible and ferocious ‘Iron’ Mike Tyson way back in 1990 must get a mention.

Although gaelic football has got all too predictable in recent years with Dublin dominating, the provincial title triumphs of Cavan and Tipperary added colour to the 2020 Championship.

Those surprise successes last season will likely be used by some to argue against the adoption of a pragmatic tiered model in the men’s game like already exists in other codes.

There is always a balance between wanting exciting contests between well-matched teams and not depriving perceived no-hopers of their dream of toppling giants on their day.

By the same token, it will remove an awful lot of the romance and mystique from soccer’s Irish Cup if this season’s competition ends up being restricted to the Premiership elite.