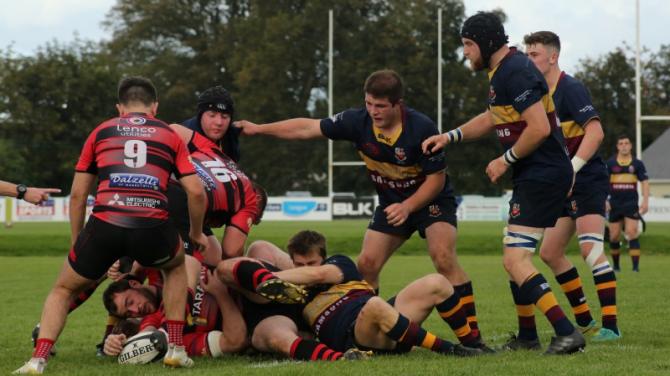 TWO tries in the last three minutes saw Banbridge overhaul Armagh and maintain their challenge for the Ulster Premiership title.

Bann coach Simon McKinstry said after the game that even if his side had not picked up those late scores, he would still have been well satisfied with what he thought was a much-improved performance.

“Of course it was good to get the win, but I was pleased with the way we went about our business,” he said.

“It was good to have Stuart Cromie back in the front row - that helped to steady things up. Ross Haughey had his best game for the Firsts on the other side of the front row and (hooker) Paul Ross played very well. He put himself about, made a few big tackles, so I was very happy with his performance.”

John Porter opened Bann’s account when he latched onto a loose ball and hacked it towards the visitors’ line. Another, more delicate touch projected it over the whitewash and the winger beat three defenders to win the race to the ball.

That try, Adam Doherty’s conversion and later penalty were however neutralised before the break by Armagh’s converted try and penalty, probably fairly reflecting the exchanges up to that point.

“We were expecting them to come after us at the breakdown,” added McKinstry. “And they did - they were good at that. But we did well - our lads were putting into practice what we’d worked on in training and it was good to see that.”

An unconverted try and a penalty put the visitors 10-18 ahead, a lead they held until those final three minutes. Was McKinstry concerned that the game was beyond recall?

“Both teams were beginning to make use of their bench and sometimes when that happens the game can fizzle out. But Ben Carson came on for us and made couple of really good breaks.

“Then we brought on John Wilson and Robbie Mathers and Robbie somehow picked up an intercept on our “22” and took off up the pitch, kicked the ball on from their 10 metre line and although Armagh won the race to the touchdown, we were now in a strong attacking position.”

Strong runs from Carson and Josh Cromie put centre Andrew Morrison in for a try which Doherty converted to narrow the gap to a single point.

Bann now had their tails up and a searing break from “22” to “22” by Doherty was finished off under the Armagh posts by scrum-half Niall Armstrong.

The full-back’s conversion attempt rebounded off the upright leaving Armagh with a sniff of retrieving the situation. But Bann saw out the short time remaining to claim the win.

Bann have no game this weekend, so their next outing is at Old Belvedere in the All-Ireland League on Saturday week.