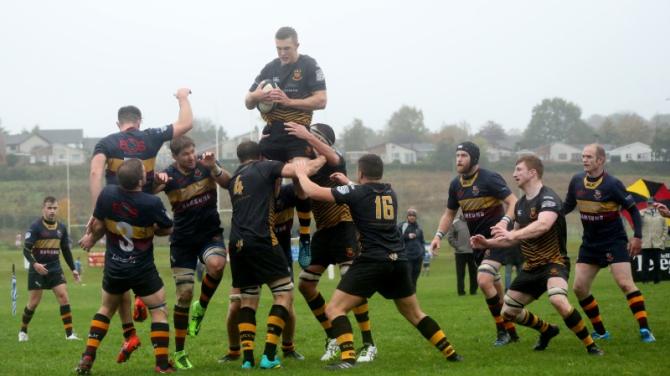 A lineout win for the Bucaneers, but a strong match win for Banbridge.

BANBRIDGE picked up their first win of the All-Ireland League season, scoring three tries without reply against a Buccaneers team which had been relegated from Division 1A in April.

And even though they failed to pick up a bonus point, coach Simon McKinstry was still satisfied with the outcome.

“Maybe we should have scored the fourth try,” he admitted. “But the weather conditions were a great leveller and it was still our biggest winning margin since moving up to Division One.

“So we’ll settle for the four points and build on what was a much improved performance from the previous week.”

Bann certainly set out their stall from the outset, hammering at the visitors’ line repeatedly in the opening quarter hour. But the Buccaneers’ defence was nothing if not well-organised. And despite a series of set scrums on their 5-metre line, they managed to resist everything Bann threw at them.

“It was disappointing not to pick up any points from those opening exchanges,” said McKinstry. “But I think the effort they had to put in to keep their line intact told in the latter stages, making it easier for us to stretch away and seal the win.”

It was clear from the outset that Bann had a distinct edge at scrum time, with Ulster prop, Schalk van der Merwe’s making a significant contribution on his first outing in Bann colours.

The South African had played Super Rugby in his native country and featured with Montpellier in the French Top 14 before signing for the Irish province. And with Stuart Cromie back in harness on the other side of the front row alongside Ulster ‘A’ hooker Peter Cromie, the Connacht scrum was repeatedly under pressure.

That yielded the first points of the game, with referee Paul Haycock awarding the penalty try in the 24th minute which divided the teams at the interval.

If Buccaneers were struggling at scrum time, they had no such issues out of touch, with lock Evan Galvin in particular ensuring enough ball to keep his side in contention.

Adam Doherty’s penalty on the hour gave Bann some cushion, but 70 minutes had been played before the home side got the score that essentially clinched the win.

With replacement Buccaneers hooker Harry O’Reilly having picked up a yellow card, Bann worked a move off a lineout. Dale Carson carried well to set up a midfield ruck and centre Andrew Morrison took an inside pass to scythe through the visitors’ defence before putting Cromie in for the second try, which Doherty converted.

And Bann picked up a third from the final move of the game, with Cromie picking up turnover ball to send Van der Merwe racing clear and behind the posts for Doherty to convert.

“A whole lot better than last week anyway,” was how McKinstry summed up the overall performance.

“Certainly Buccaneers weren’t as strong as Belvedere but we were a lot better too. The lineout was well-improved.

“Maybe we tried to push the pass a bit in the opening quarter hour when perhaps we should have just held onto the ball and gone through an extra phase or two. But we got there in the end.”

McKinstry was pleased with the way his half-backs had performed.

“Niall (Armstrong) controlled the game well from scrum-half and his kicking was good. And Jonny (Little) was out of position at 10 but I was pleased with the way he played.

“David McCann (flanker) is a very good player, still only 18 and at the other end of the age spectrum Dale Carson showed in the 20 minutes he played that he still has a lot to offer.”

With just two games played and 16 to go, it seems early to be talking about must-win games. But Saturday’s match at Naas must surely come into that category for Bann.

The Kildare side has maximum 10 points from their two outings and if they were to win on Saturday, that would open up a significant gap on the Rifle Park side.

McKinstry is aware from his own playing days that it is never easy to win at Naas.

“It’s always hard to come away from there with points. But we did beat them away last season. We went up a level against Buccaneers and we’re going to have to go up another level if we hope to beat Naas.”

With Ulster ‘A’ having completed their programme of matches last weekend, Bann will be able to call on a number of players who featured on the representative side. That will give the coach and his management team a few selection headaches this week, but it should result in Bann fielding their strongest squad of the season. They will have to if they are to halt Naas’s run of success.