Game management to be looked at after Banbridge firsts' defeat 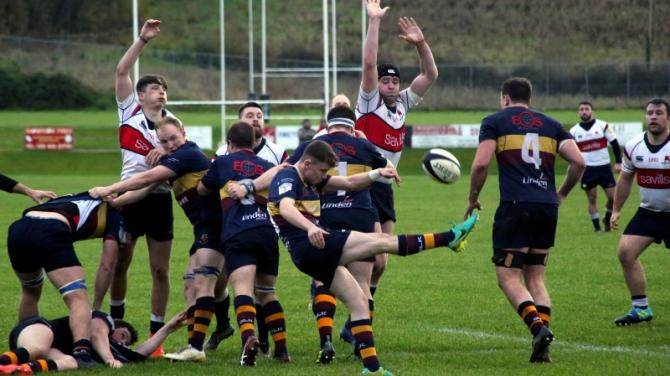 Banbridge pounce on the opportunity to free the ball.

BANBRIDGE suffered what was just their second home defeat in a scheduled AIL League game in four years, going down to an Old Wesley side which, according to Simon McKinstry, ‘outmuscled’ his team especially in the first half.

The Rifle Park coach admitted that his side’s performance had fallen well below their capability.

“We had said that we needed to step up from the Ballymena game but instead we took a step backwards,” he said reflecting on a result that ‘hurt’.

“The players have taken responsibility for the defeat - there were just too many errors and too many malfunctions. Wesley dominated the breakdown and the contact in the first half, slowing our ball down a lot more than we would have liked.

“That’s probably because they were that bit more physical than us. And that gave their defence more time to spread out and prepare for our next attack.”

If it was the power of the visitors’ pack that gave them the early edge, it was a subtle grubber in behind the Bann defence that allowed the visitors to take the lead in the 18th minute.

A defeat at home for the firsts when they played Old Wesley.

With the referee playing advantage after one of the too-many penalties Bann conceded, Wesley out-half Tom Kiersey slid a beautifully weighted kick into Bann’s in-goal, to which his full-back Lachlan Anderson won the race, with Kiersey converting.

Eight minutes later the Dubliners were 12 points up, with Kiersey shrugging off two attempted tackles to touch down for an unconverted try after another penalty had given them a strong attacking lineout.

With their lineout misfiring, Bann were struggling to make headway against the rugged Wesley defence. But they were able to capitalise when Ben Carson’s tackle on his opposite number dislodged the ball.

Conor Field scooped it up to Ethan Harbinson on his 10 metre line and the flanker fed Andrew Morrison who raced 30 metres down the right wing. Field was back in support to take the inside pass and scamper the 30 metres to the try line for a 5-12 interval scoreline.

If the home team’s lineout was struggling on occasions, their set scrum had no such problems and off the base of that they put the Wesley defence under extreme pressure in the third quarter.

Field was almost in for his second try, just failing to ground the ball after Carson’s break on the halfway line had sent Peter Cromie tearing down the right wing. But the pressure eventually yielded a simple penalty, which Adam Doherty converted to close the gap to four points.

Bann should have made more of the time they spent close to the opposition line, especially when the visitors’ influential lock JJ O’Dea was dispatched to the bin in the 64th minute, but despite their dominant scrum and a couple of lineouts within scoring range, they were unable to add to their tally.

And with the clock ticking down an attempt to run the ball from deep saw the visitors win a penalty which Kiersey converted with the last act of the game.

“Our penalty count wasn’t good,” conceded McKinstry. “Our lineout was poor and we need to take a look at our game management - we didn’t do particularly well in that aspect.

“We didn’t make them work hard enough for the two scores they got. But those are all things we can work on.”

McKinstry was adamant that he wasn’t going to use the absence of three forwards from the pack that had featured against Ballymena as an excuse for the defeat. With Greg Jones on Ulster duty, Caleb Montgomery injured and Chris Allen unavailable, as well as Michael Cromie (injured) and Robin Sinton a long-term injury victim, Bann’s forward resources were stretched.

McKinstry said that one positive was the performance of Ben Carson. “He made some great tackles, made good ground when he carried the ball and was quite vocal at half-time which was good to see.”

Bann now have a two-week break before travelling to Ballymacarn Park on Saturday, 24 November to face a Ballynahinch side which will be equally determined to get their season back on track after losing at Naas.