Revenge is sweet for Bann 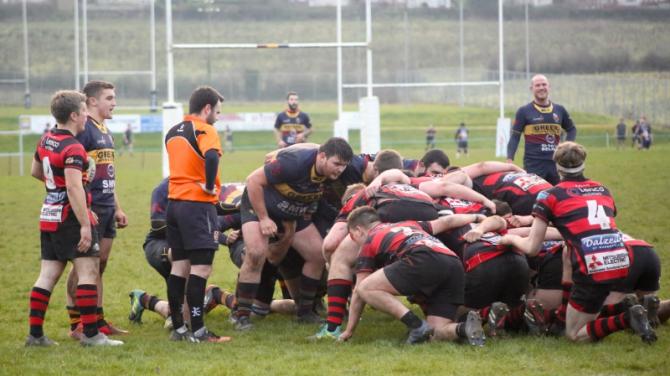 James McCrum leads his team into the scrum as Banbridge faced City of Armagh in the return fixture.

BANBRIDGE took full revenge for their pre-Christmas defeat at the hands of City of Armagh by coming away from the Palace Grounds with a five point haul from their return All-Ireland League game.

It was just the start to 2019 that the Rifle Park side needed after winning just one of their five previous AIL games. And Coach Simon McKinstry put it down to the players’ attitude and their reaction to that home defeat.

“The guys knew they’d blown it big time by letting Armagh in for those two late scores to steal the points from our home game,” he admitted reflecting on Saturday’s match.

“But credit to the players, in the changing room after that the attitude was, we play them again in a few weeks and that gives us the opportunity to put things right. And thankfully they didn’t just say they were going to do it - they did it.”

Bann certainly started well on Saturday, hogging the early possession and laying siege to the home line. But a sixth minute Adam Doherty penalty was a paltry return for their efforts.

And when Armagh did get their hands on the ball, they showed their attacking potential by putting flanker Robert Whitten in for a try which out-half Cormac Fox bettered off the tee.

Bann struck back 10 minutes later when, with the referee playing advantage, full-back Rob Lyttle produced a neat off-load to put Conor Field in at the corner, with Doherty converting.

With the interval approaching Bann lost prop Stuart Cromie to a yellow card after he had been deemed to have committed a ‘no-arms tackle’. And when Bann spilled the ball on the opposition “22”, Armagh produced a telling counter-attack, spearheaded by their back row, which was finished off in style by left winger Andrew Willis for a 12-10 interval lead.

Prop Cromie had not returned to the fray very long when Bann were again reduced to 14 men, Stephen Irvine being deemed to have tackled high.

Every effort given to the tackle by Banbridge.

Armagh then began a prolonged assault on the Bann line, but in the end they had to settle for three points off Fox’s boot after stubborn defence had denied them the try their efforts should have yielded.

Irvine had now returned to the action and he fielded a kick following the re-start, fended off two defenders and off-loaded to Lyttle, whose pace took him clear of the Armagh cover as he raced 45 metres for his side’s second try.

That levelled the scores on the hour and four minutes later a second Doherty penalty edged the visitors in front. From that point on Bann dominated and after Lyttle and Doherty had combined to pierce open the defence, Stuart Cromie belied the number 3 on his back by being up in support to take the scoring pass.

And the icing on Bann’s cake came from the last move of the game, with Caleb Montgomery shrugging off the Armagh prop’s attempted tackle to cross for the bonus point try, with Lyttle adding the extras in the replaced Doherty’s absence.

McKinstry picked out that defensive effort when Irvine was sidelined as the turning point in the game.

“They went for a series of scrums and we held them out - then Mike Bentley held them up over the line and they dropped the ball so we got the scrum to take the pressure off.

“I thought we played pretty well considering we were down to 14 men twice. The lineout and scrum went well and that try at the end was a real bonus.”

The coach singled out Lyttle for his contribution.

“Every time he got the ball there seemed to be three or four Armagh players on him. But they just couldn’t contain him and he produced magical off-loads and intelligent kicks to go with his wonderful turn of pace.

“I thought Alex Thompson had his best game in a Banbridge shirt, Michael (Cromie) played very well and Conor (Field) produced a couple of nice breaks and scored a good try.

“All-in-all, I don’t think anyone played badly. We were solid across the pitch and hopefully we’ll start producing a few more performances like that.

“In the last 20-25 minutes of that game we were as good as we’ve been since last season. But we’ve another big game coming up against St Mary’s, so we’re going to have to match that display if we’re to stay in contention in what is an unbelievably tight league.”