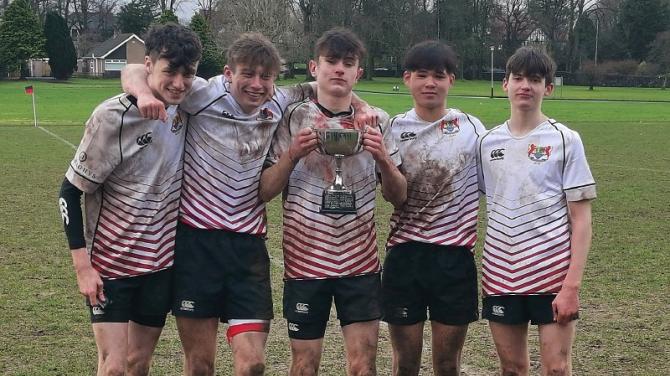 The game, played at the neutral venue of Ballymena Academy, was a tight affair where the Academy always had the lead, but were never clear from danger until the final score with three minutes to play.

Winger Alfie Geoghegan was the match winner, capitalising on the great work of No 8 Ryan Hanna to score the decisive try which allowed Captain Andrew Jackson to lift the trophy.

The Academy had earned the right to contest this final after a good run through the competition. A 22-14 win away to Antrim Grammar was an immensely physical battle and this was followed up by another tight 17-7 win at home to neighbours Portadown College, in a game that could have gone either way until the dying minutes.

The showpiece final was played out in front of a large crowd as both schools had brought two bus-loads each of supporters along to Ballymena to cheer on their teams. Parents and past pupils from both schools added to the atmosphere and the occasion was very special for both teams.

Unfortunately, the weather deteriorated just prior to kick off and wind and rain poured down the pitch as Banbridge Academy won the toss and chose to play with the elements in the first half.

They took immediate advantage of the conditions as, after a series of committed drives, No 8 Ryan Hanna powered over the line for the opening try which was converted by captain and out half, Andrew Jackson.

The game levelled out for a period after this fast start but on 20 minutes, astute kicking from Jackson saw the Academy attack again and, after good carries from the likes of flanker Noah Bell and hooker Callum Little, second row Jonathan Howard picked from a close ruck and dotted the ball down over the line with a clever bit of thinking as the Limavady defence were setting up for another big carry.

Jackson was once again successful with the kick, taking the Academy in to a 14-0 lead. As the half drew to a close, the wind eased and the very committed Limavady team took advantage of the lull to slot over a penalty right on half time to leave the score 14-3 in favour of the Academy.

The second half was always going to be difficult for the Banbridge men, playing into the breeze and defending just an 11 point lead.

This proved to be the case as a resurgent Limavady poured on the pressure for large periods of the next 25 minutes, but the Academy defence was simply fantastic. Massive defensive shifts from the entire team repelled Limavady again and again and, even with two consecutive yellow cards for Academy players, both for technical offences, the defence held firm.

With five minutes left, however, the team from the north west found a rare gap in the defence and nipped in for a score which their out half converted. This left the scores 14-10 with a perilous few minutes remaining but the Academy responded magnificently as they recovered their own kick off and recycled for No 8 Hanna to make another huge line break, although he was stopped just short by the Limavady full back.

The Academy kept the ball alive, however, and moved it to the left wing where Alfie Geoghegan gathered and then outpaced the cover defence to score in the left corner and seal the game for the Academy. The last few minutes were played out under control by the Banbridge boys and when captain Jackson kicked the ball off the field to signal the end of the match, the travelling support erupted and the players cheered and hugged to celebrate an outstanding victory in difficult conditions against a very strong Limavady side.

On behalf of the Ulster Branch, John Andrews made the medal presentations to both schools and then presented captain Andrew Jackson with the Medallion Schools’ Bowl, which he raised aloft to the delight of the players and supporters alike.

Both teams would like to register their thanks to Ballymena Academy for hosting the final, it was a fitting venue for what will be a wonderful memory for all the players involved.

The Academy coaching team of Charlie Farrell and Brian O’Shaughnessy were immensely pleased with their team’s performance and in particular their grit to hold on during a very difficult second half. They also paid tribute to the travelling support and the hugely supportive parents who had added so much to this Medallion season.