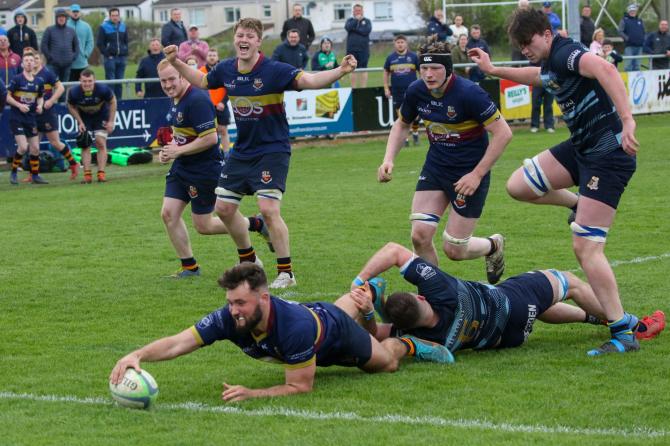 Ben Carson's late try last week saw Banbridge move closer to Division 1B survival last week. Now their head coach is calling for a big crowd to turn out and cheer them over the line tomorrow.

BANBRIDGE Rugby Club's head coach has called for a big support to turn out to cheer the club on ahead of their make or break relegation play off second leg against Navan tomorrow (Saturday).

They will welcome the Meath side to Rifle Park and hold a seven point lead on aggregate after winning 25-18 away from home in the first leg last week.

And Head Coach Mark McDowell has admitted the season hasn't gone to plan while calling for a large turnout of support to help them get over the line and retain their Division 1B status in the All Ireland League (AIL) for next season.

In an open letter to supporters, he said: "It's been a difficult season for the 1st XV, and it is one we are not satisfied with. Finding ourselves in the AIL 1B relegation play off was never part of the plan.

"Last weekend we won a tight contest down in Navan. We know we need to be better this weekend.

"The players and management have worked incredibly hard throughout the season, and despite sequences of poor results, have never waned in their determination to improve and ensure we retain our AIL 1B status. We now have one more game standing between us and achieving this goal.

"The players need your support this weekend, do not underestimate the difference you can make. They deserve to play in front of a packed and passionate Rifle Park.

"Get down, make noise, get behind the players and support your club!"